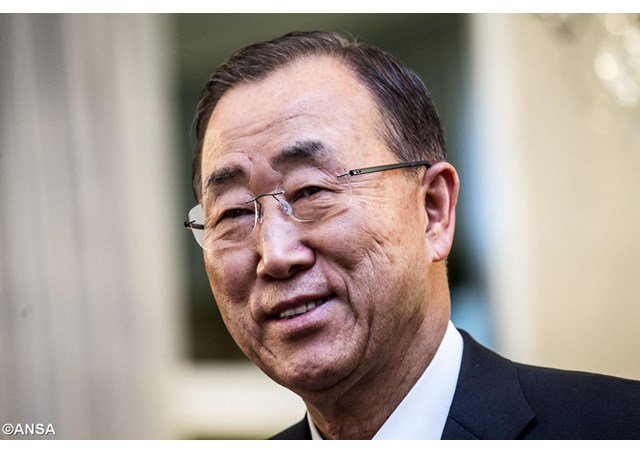 (Vatican Radio)  The United Nations Secretary General Ban Ki-moon met with Pope Francis in the Vatican on Tuesday before going on to address a conference exploring the moral issues connected to climate change. The one day international symposium has been organized by the Pontifical Academy of Sciences and will include a video message to participants from Pope Francis about the Christian imperative of stewardship of creation. The UN leader said he had a “fruitful and wide ranging conversation with the Pope and he commended participants in the symposium for raising awareness of the urgent need to tackle climate change and promote sustainable development

I thank the Pontifical Academy of Sciences for hosting this important symposium, and His Holiness Pope Francis for extending such a warm welcome.

Pope Francis and I have just had a fruitful and wide ranging conversation.

I commend His Holiness, and all faith and scientific leaders here, for raising awareness of the urgent need to promote sustainable development and address climate.

That is why I say climate change is the defining issue of our time.

Responding to it effectively is essential for sustainable development.

It is a moral issue.  It is an issue of social justice, human rights and fundamental ethics.

We have a profound responsibility to the fragile web of life on this Earth, and to this generation and those that will follow.

That is why it is so important that the world’s faith groups are clear on this issue – and in harmony with science.

Science and religion are not at odds on climate change.  Indeed, they are fully aligned.

Together, we must clearly communicate that the science of climate change is deep, sound and not in doubt.

Climate change is occurring – now -- and human activities are the principal cause.

The facts of climate change are upheld by the Intergovernmental Panel on Climate Change and the major scientific bodies of every government in the world, including the Vatican’s Pontifical Academy of Sciences.

Our response has to be global, holistic and rooted in universal values.

Climate change affects us all, but not equally.

Those who suffer first and worst are those who did least to cause it: the poor and most vulnerable members of society.

Around the world, I have seen how floods, droughts, rising sea levels and increasingly severe storms are causing terrible harm, and prompting families to migrate, often at great peril.

As His Holiness Pope Francis has said, "We need to see, with the eyes of faith … the link between the natural environment and the dignity of the human person."

The most vulnerable must be foremost in our thoughts this year as governments construct a global response to climate change and a new framework for sustainable development.

The new Sustainable Development Goals, which will be adopted in September, will provide a holistic approach that puts social and environmental objectives on par with economic objectives.

Eradicating extreme poverty, ending social exclusion of the weak and marginalized, and protecting the environment are values that are fully consistent with the teachings of the great religions.

Pope Francis has been one of the world’s most impassioned moral voices on these issues, and I applaud his leadership.

The United Nations, too, champions the disadvantaged and the vulnerable.

We share a belief in the inherent dignity of all individuals and the sacred duty to care for and wisely manage our natural capital.

And we believe that when people strive toward a common goal, transformational change is possible.

That is why we work in partnership with governments, the private sector, civil society and faith-based groups.

If ever there were an issue that requires unity of purpose, it is climate change.

Science tells us we are far off track from reducing global emissions sufficient to keep global temperature rise below 2 degrees Celsius.

We are currently on course for a rise of 4-5 degrees Celsius.

This would alter life on Earth as we know it.

This is morally indefensible.

It contradicts our responsibility to be good stewards of creation.

People everywhere are realizing we must fundamentally change our ways.

Some world leaders have called for the creation of an “ecological civilization,” others for “development without destruction”.

Many countries are moving down a low-carbon pathway and investing in clean energy that can power truly sustainable development.

In this, the world’s religions can provide valuable leadership.

As the Holy See has said, “there is a moral imperative to act, for we all bear the responsibility to protect and to value creation for the good of this and future generations”.

I very much look forward to the upcoming encyclical by Pope Francis.

It will convey to the world that protecting our environment is an urgent moral imperative and a sacred duty for all people of faith and people of conscience.

It is critically important that people and their leaders hear your strong moral voice in the coming months.

In July, leaders will gather in Addis Ababa, for the third International Conference on Finance for Development.

And in Paris, in December governments will meet to forge a meaningful universal agreement on climate change.

Paris is not the end point, but it must be a turning point in finding a common way forward in meeting the climate challenge.

We need a global climate agreement that is universal, fair and ambitious.

Reasons of equity and historical responsibility require no less.

But all countries must do more and be part of the solution, in line with what the science requires.

Citizens around the world are demanding an agreement and demanding action.

I urge you to join them.

Let the world know that there is no divide whatsoever between religion and science on the issue of climate change.

Your influence is enormous.

You speak to the heart of humanity’s deepest hopes and needs.

You can remind us all that we do not exist apart from nature, but are part of a wider creation.

Together, the major faith groups have established, run, or contribute to over half of all schools world-wide.

You are also the third largest category of investors in the world.

I urge you to invest in the clean energy solutions that will benefit the poor and clear our air.

I also urge you to continue to reduce your carbon footprint and educate your followers to reduce thoughtless consumption.

Your Eminences,  Ladies and Gentlemen,

Future generations will judge us harshly if we fail to uphold our moral and historical responsibilities.

This year, with the upcoming encyclical, the Sustainable Development Goals Summit in September, and a global climate agreement, we have an unprecedented opportunity to articulate –and create – a more sustainable future and a life of dignity for all.

This is a future in which we are good stewards of our common home and good neighbours to all.

I am grateful for your moral leadership, and thank you for your commitment.