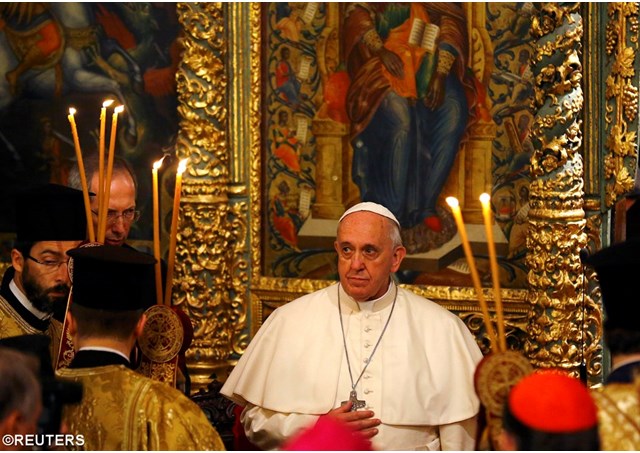 (Vatican Radio) Here in the Vatican we are marking Saint George’s Day in a special way. Yes, Cardinal Bergoglio may have taken the name Francis as Pope but his Christian name is Jorge, George to you and me. That’s why we've chosen to bring you a timely reflection for his Feast day on the 23rd of April. Especially as in England our patron Saint is Saint George. One who's most often depicted as a soldier fighting a dragon to save someone else's life.

Monsignor Peter Fleetwood reflects for us on the meaning of this symbolism explaining how dragons may be mythical animals, but myths contains symbols and symbols sum up some aspect of life that is very important or powerful: " I suspect the dragon represents evil in any form. Some people may not like to hear this , but the dragon may represent evil people".

Listen to Monsignor Peter Fleetwood in a programme presented and produced by Veronica Scarisbrick for the series "Why Bother? Staying Catholic despite it all.."

We would have to apologise to the Chinese in this respect, Father  Peter Fleetwood specifies, for according to an ancient tradition they believe dragons are symbols of good, so exactly the opposite. But this is no Chinese story for as he tells us here in the West : "The dragon is a symbol of the power evil people can wield in this world. They can force good people into submission and either damage them or humiliate them or lead them astray. This is a frightening reality, and it is a reminder that sometimes goodnes and holiness mean bravery in the face of wickedness. At a baptism, the new Christian is exorcised, not because she or he is possessed , but because the Christian Church recognises where human power runs out and we simply have to rely on God. Saint George is a reminder that we need help to survive when evil is about. It may be a naive symbolism, but the pictures and statues of Saint George are all about the battle between good and evil. They also heark back to what Jesus said about his sheep. He was there to protect them , because they needed protection. Saint George is a reminder that sometimes good people are called upon to bother to be brave and offer that protection in place of Jesus".