Pope: our vocation is to care for the covenant of marriage 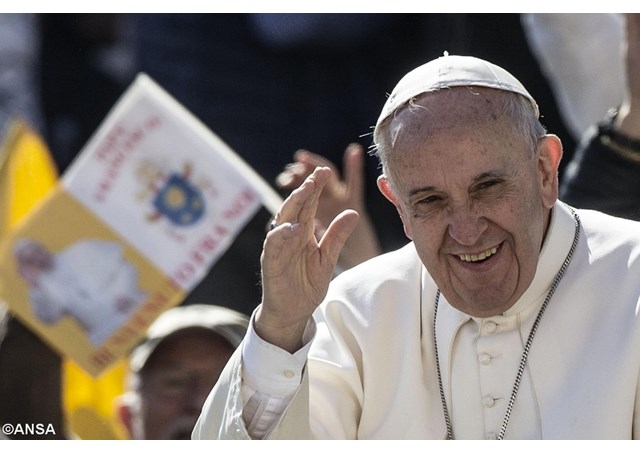 (Vatican Radio) At his general audience on Wednesday, Pope Francis continued his catechesis on the family, focussing again on the complementarity of men and women.

Pope Francis commented on the second account of the creation of man in Genesis (following his commentary at the previous audience on the first account of man’s creation. The first man, Adam, is created “alone” – and God determines to make for him “a helper suited to him.” When the first woman is presented to the man, he recognizes in her “bone of my bone, and flesh of my flesh.” Finally there is a mirroring, a reciprocity,” the Pope said. “The woman is not a ‘replica’ of the man; she comes directly from the creative act of God. The image of the ‘rib’ does not in any way express inferiority or subordination, but on the contrary, that man and woman are of the same substance and are complementary.”

God is generous to the man and the woman, confiding the care of the earth to them. But, the Pope said, the “evil one” introduced “suspicion, disbelief, and mistrust” in their minds – and ultimately led them into the first sin.

“The sin generates distrust and division between the man and the woman,” Pope Francis said. “Their relationship will be undermined by a thousand kinds of abuse and subjugation, of deceitful seduction and demeaning humiliations, up to the most dramatic and violent.” He spoke about “the negative excesses of patriarchal cultures… the multiple forms of ‘machismo’… the instrumentalization and commodification of the female body in the current media culture.” But he also warned about “the recent epidemic of distrust, of scepticism, and even of hostility that is spreading throughout our culture – in particular stemming from an understandable diffidence on the part of women – regarding a covenant between man and woman at once of achieving the intimacy of communion and of safeguarding the dignity of difference.”

If we cannot generate sympathy for the covenant between men and women, Pope Francis said, children will be increasingly uprooted. “The social devaluation of the stable and generative covenant of the man and of the woman is certainly a loss for everyone,” he said. “We must recover the honour of marriage and the family.” Pope Francis continued, “the safekeeping of this covenant between man and woman, is therefore for us believers a challenging and exciting vocation” in today’s world.

The Pope concluded his catechesis with the image, from Genesis, of God clothing Adam and Eve after their sin. “It is an image of tenderness towards the sinful couple that leaves us open-mouthed with wonder. It is an image of paternal safeguarding of the human couple. God Himself cures and protects His masterpiece.”

Below please find the English language  summary of the Pope’s catechesis during Wednesday’s General Audience:

Dear Brothers and Sisters: Continuing our catechesis on the family, we recall God’s creation of man from the ground. He is placed in the garden, where he is to care for creation. Yet God sees that man is alone, and so he creates woman, someone complementary with whom man can share his life. Man and woman are created to live a life of reciprocity, to enter into a covenant together. Yet sin introduces discord into their relationship, lack of trust and suspicion. We see throughout history the fruit of this sin, especially towards women – oppression, violence and exploitation. Most recently, this mistrust and scepticism has led our culture to disregard the marriage covenant between a man and a woman, that covenant which deepens communion and safeguards the dignity of their uniqueness. When the stable and fruitful covenant between a man and a woman is devalued by society, it is a loss for everyone, especially the young. For all our sins and weaknesses, our vocation is to care for the covenant of marriage. It is a vital and energizing vocation, through which we cooperate with our heavenly Father, who himself always cares for and protects this great gift.