Holy See to UN: Christians and religious minorities are pleading for action 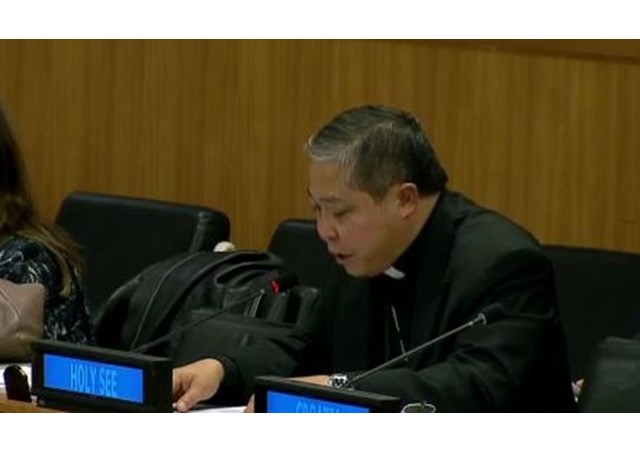 In an address at a UN Conference on the theme: “The Persecution of Christians Globally: A Threat to International Peace and Security”, Archbishop Bernardito Auza, Permanent Representative of the Holy See to the United Nations, urged the international community to act in protecting Christians and religious minorities in the Middle East.

The following is the text of Archbishop Auza’s address:

Before the tens of thousands who came to St. Peter’s Square to listen to his Easter Message to the City of Rome and to the World last April 6, Pope Francis vigorously appealed to raise up “intense prayer” and “tangible help” for the Christians throughout the world, “who are being persecuted, exiled, killed, and decapitated for the sole reason that they are Christians.”

“They are our martyrs of today,” he continued, and “they are more numerous than in the early Christian centuries.”

Today in this setting where the deliberations of the international community take place, we come with both of our eyes wide open. And as we consider in depth the details of the persecution of Christians across the globe, it’s going to be very difficult to keep our eyes dry.

In Iraq and Syria, in Nigeria and Libya, in Kenya and in regions of the Asian subcontinent, the earth has been getting literally soaked with blood. We have seen barbaric images of Coptic Christians beheaded in Libya; churches filled with people blown up during liturgical celebrations in Iraq, Nigeria and Pakistan; ancient Christian communities driven out of their homes on the biblical Plain of Nineveh; Christian students executed in Kenya…

Even as we speak, thousands across the world are being persecuted, deprived of their fundamental human rights, discriminated against and killed simply because they are believers.

We know that these attacks against people of faith do not happen just to Christians. Less than a month ago, hundreds of Muslim worshippers were killed or wounded when suicide bombers allied with the so-called Islamic State attacked the two Mosques in which they were worshipping in Yemen. Muslim minorities elsewhere have also been attacked by extremists who claim to be Muslims themselves.

Ethnic minorities have been targeted as well. During a UN Security Council debate on the victims of attacks and abuses on ethnic and religious grounds in the Middle East, which was held March 27, Iraqi Yazidi congresswoman Vian Dakhil, with tears in her eyes, told the world: “We are being slaughtered, our girls are being sold, our children are being taken.”

Nevertheless, the fact is, in many parts of the world, Christians have been specifically targeted. As a 2014 Pew Research Center report on religious hostilities across the world documented, brutal attacks on people of faith happen to Christians more than to any other religious group. Between 2006 and 2012, Christians were targeted through harassment, persecution or martyrdom in 151 out of 193 Members States of the United Nations. This points to a collective failure of this international organization, whose primary objective is to spare peoples and nations from the scourge of violence and unjust aggressions.

His Excellency the UN Secretary-General Mr. Ban Ki Moon has repeatedly condemned “in the strongest terms all persecution and violations of the rights to life and physical integrity of individuals and communities based on religious, ethnic, national, racial or other grounds.” His presentation of the situation in the Middle East during the March Security Council briefing was very sobering: The so-called “Islamic State” (ISIL/ISIS) or Da’esh has been systematically killing ethnic and religious minorities and those who disagreed with its warped interpretation of Islam. He said that in Iraq, information strongly suggested that Da’esh had perpetrated genocide, crimes against humanity and war crimes, and that minorities had been victims of that violence. Syria has seen an exceptional rise in those atrocities. In Libya, Da’esh-affiliated groups were targeting minorities and attacking religious sights.

Pope Francis has expressed several times his “great pain to know that Christians in the world submit to the greatest amount of such discrimination.” He said, “This is happening more than 1700 years after the edict of Constantine, which gave Christians the freedom to publicly profess their faith.” He added, “This is not a fantasy; the numbers tell us.” Between 100 and 150 million Christians are persecuted in the world today.

According to the Religious Freedom in the World Report 2014 – which covers the period from October 2012 to June 2014 –acts of religious persecution are not only widespread, but also on the increase. In almost every country, the change in the status and condition of religious minorities has been for the worse. Religious persecution is alarmingly high, or high, or worrisome in 116 countries, or in 59% of all the countries in the world. In brief, global religious freedom has entered a period of serious decline in the last three years.

In the Middle East in particular, Christians have been specifically targeted, killed or forced to flee from their homes and countries. Only 25 years ago, there were nearly two million Christians living in Iraq; the most recent estimates are less than a quarter of this figure. Faced with the unbearable situation of living in a conflict zone controlled by terrorist and extremist organizations who constantly threaten them with death, and with a deep sense of feeling abandoned, they have been forced to flee their homes.

The disappearance of these communities from the Middle East would not only be a religious tragedy, but a loss of a rich cultural-religious patrimony that has contributed so much to the societies to which they belong. For 2,000 years, Christians have called the Middle East home; indeed, as we all know, the Middle East is the cradle of Christianity. Thus, it is painful and unfathomable that these ancient Christian communities in the region --- especially those who still speak Aramaic, the language of Jesus Christ --- are among those threatened with extinction.

Pope Francis has repeatedly stated that we cannot resign ourselves to thinking of the Middle East without Christians. Their uninterrupted existence in the region is testimony of many centuries of coexistence, side by side with Muslims and other religious and ethnic communities. The whole world has a great interest in preserving that coexistence and we must all join to prevent the expulsion of Christians before it’s too late.

That statement called attention to the fact that “the existence of many religious communities is seriously threatened” with Christians “now especially affected.” It called on all States to join together and address this alarming situation by building together a culture of peaceful coexistence, recognizing religious and ethnic pluralism as an enrichment to the globalized world, and reaffirming their commitment to “respect the rights of everyone, in particular the right to freedom of religion, which is enshrined in the fundamental international human rights instruments.”

Is it now too late to act? When we call to mind those who have already lost their lives, any action would come too late. But any action to spare even just one from persecution and from all forms of atrocities will not only be timely, but most urgent. The fate of those persecuted urges us to do all that we can to prevent further victims of attacks and abuses. Christians and other religious minorities of the Middle East and elsewhere plead for action, not in some abstract form, but in a manner that is truly conscious of their pain and suffering and their existential fear for their survival.

I am grateful for your presence this afternoon. Your presence is already an act of solidarity with the persecuted Christians all over the globe. They are counting on us and praying for ever greater efforts on our part to spare them from protracted persecution. Their very own survival could depend on our acts of solidarity. We pray that we may be able together to open the eyes of the world to what is going, and help them not to take their focus off of the plight of persecuted Christians until their lives are secure, their dignity is defended, and their rights protected.

Thank you very much for your presence here this afternoon.