Pope Francis: ‘Human Trafficking is A Plague on Humanity’ 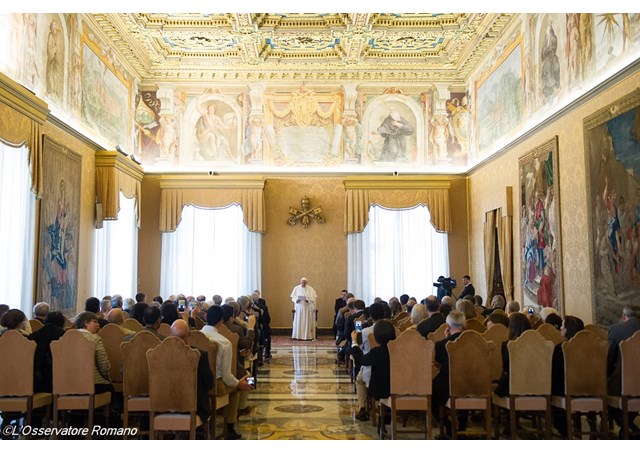 Pope Francis met this afternoon with the Pontifical Academy of Social Sciences who are in Rome for their plenary session to discuss ways to combat human trafficking.

Following a greeting by the Academy’s President, Margaret Archer, the Pope welcomed the members and expressed his gratitude for their work in finding new ways to eradicate all new forms of slavery in the world.

Drawing from the Beatitudes, the Holy Father noted that those who suffer from forms of modern slavery, such as forced labor, prostitution and organ trafficking are the “least among us” and that all men and women of good will are called to renew their commitment in improving the human condition.

However, he also said that the current economic system, one domineered by profit, has allowed for these new forms of slavery to develop in a way that is “worse and more inhumane” than those of the past.

“We must be more aware of this new evil that, in a global world, wants to hide it because it is scandalous and “politically incorrect,” he said.

Echoing the sentiments of Benedict XVI’s condemnation of human trafficking, the 78 year old Pontiff said that it is “plague on the body of contemporary humanity” and that society is called to form new legislation that penalizes traffickers and help rehabilitate victims.

The Jesuit Pope, however, noted that societies and civil authorities must step up to combat human trafficking, which “constitutes a regression of humanity”.

“Many times, many times these new forms of slavery are protected by the very institutions who should defend the population from these crimes,” he said.

Concluding his address, Pope Francis encouraged the members of the Pontifical Academy to continue their work in the light of the Beatitudes, saying that the path towards Heaven is in “the company of the small and least among us”.