Pope at Mass: Those who do not dialogue disobey God 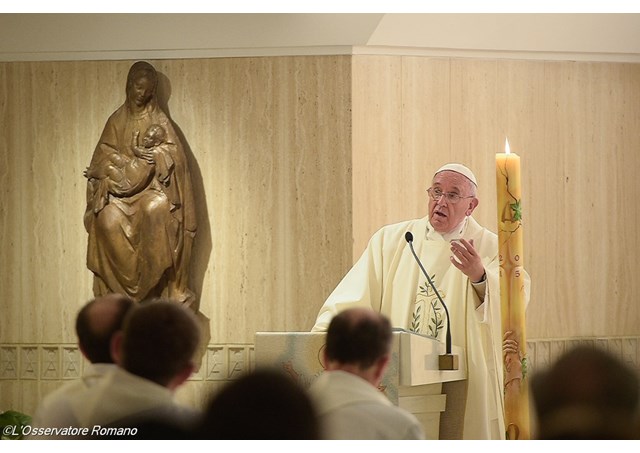 (Vatican Radio) Pope Francis on Thursday offered the Mass at Casa Santa Marta for his predecessor, the Pope Emeritus, on the occasion of Benedict XVI’s 88th birthday. “I want to remember that today is the birthday of Benedict XVI,” Pope Francis said at the liturgy. “I offered the Mass for him, and I invite you to pray for him, that the Lord might sustain him and grant him much joy and happiness.”

In his homily, Pope Francis said those who do not know to dialogue do not obey God; they want to silence those who preach the newness of God.

Obeying God means having the courage to change paths

The liturgy of the day speaks to us about obedience, the Pope said. “Obedience often brings us along a path that is not the one I think should be, but along another path.” To obey is “to have the courage to change paths when the Lord asks this of us.” “The one who obeys has life eternal,” while for “the one who does not obey, the wrath of God remains upon him.” So, in the first reading from the Acts of the Apostles, the priests and leaders order the disciples of Jesus to stop preaching the Gospel to the people: they became infuriated, they are “full of jealousy,” because miracles took place in the presence of the disciples, the people followed them, “and the number of believers grew.” They put the disciples in jail, but in the night, the Angel of the Lord freed them and they returned to proclaiming the Gospel. When he was arrested and questioned again, Peter responded to the threats of the high priest: “We must obey God rather than men.” The priests did not understand:

“The history of this stubbornness, the journey,” the Pope emphasized, “is that of closing in on oneself, is that of not dialoguing, it is the lack of dialogue”:

And the sign that reveals that a person “does not know to dialogue,” “is not open to the voice of the Lord, to the signs that the Lord does among the people,” the Pope said, is the “fury and the desire to silence all those who preach in this case the newness of God, that is that Jesus is Risen. There’s no reason, but they reach this point. It is a sorrowful journey. These are the same people that paid the guards at the sepulchre to say that the disciples had stolen the body of Jesus. They did everything they could to not open themselves to the voice of God.”

And in this Mass let us pray for the teachers, for the doctors, for those who teach the people of God, that they would not be closed in on themselves, that they would dialogue, and so save themselves from the wrath of God, which, if they do not change their attitude, will remain upon them.