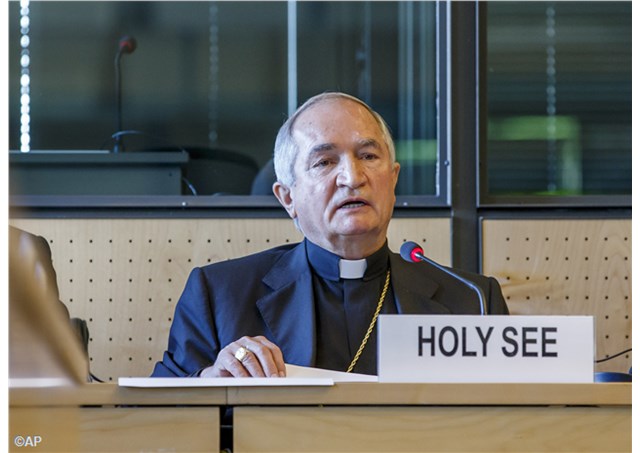 (Vatican Radio)  Archbishop Silvano Tomasi, the Holy See’s Permanent Observer to the United Nations in Geneva, said it would be wise to prohibit those robotic weapons with lethal capacity that cannot be effectively controlled by humans. He was speaking at an Informal Expert Meeting on Lethal Autonomous Weapon Systems held in Geneva.

Please find below the full text of Archbishop Tomasi’s address (made in English) to the meeting:

In  today's  conflicts,  we  note  the  growing  importance  of  conventional  military  robots  or  computerized  robots. For either one, there is the development of research aiming at granting them larger autonomy in relation to their human operators and a capacity for innovation. This does not go without raising deep juridical and ethical questions. Furthermore, the analysis of combat robots cannot be separated from an analysis of the nature of conflicts that happen more and more in essentially urban areas.

These new developments prompt a serious evaluation of combat robots before we move too far in their integration into the methods of modern warfare. However, it would be insufficient to approach the question merely from the perspective of International Humanitarian Law. The substitution of human decision making by sophisticated and autonomous machines raises a series of questions that are linked to anthropology and ethics.

I  allow  myself  to  enumerate  certain  elements  that  my  Delegation  considers  of  fundamental importance  for  our  discussion. A  more  substantial  document  will  be  distributed  and  it  will  deal essentially with an ethical reflection concerning lethal autonomous weapon systems.  International  Humanitarian  Law is  necessary and many agree  that it is an important framework to regulate the use of  autonomous armed robots. However, this framework is certainly not sufficient.  In addition, we know it has sometimes been attempted to justify immoral conflicts by appealing  to “the  just  war  theory”.  It  is  therefore  necessary  to  go  beyond  International  Humanitarian  Law  to  grasp, in all their dimensions, the challenges raised by roboticized weapon systems. Certain  issues  deserve  particular  attention  and  demand  discussion,  if  we  want  to  approach  the questions of military robotization from an ethical point of view.

1.  The temporary delegation or the permanent transfer of certain powers to machines endowed with  the  capacity  for  innovation  and  action  must  always  be  evaluated  in  accordance  with anthropological  coherence.  By  adopting  civilian  or  military  technological  instruments,  designed  to assist in a series of difficult or dangerous tasks,  human beings must always be  attentive  so  as  not  end  up,  after  having  delegated  these  powers  to  their  machines,  in  a  situation where they become the slaves of their own inventions.

2.  The relational  aspect  is  equally  important.  Today,  perhaps,  the  risk  of  progressively  substituting  human  actors  with  machines  is  not  given  sufficient  consideration.  As the  philosopher Emmanuel Levinas has shown, the encounter with the face of another  is one of  the fundamental experiences that awaken  moral consciousness and responsibility. All wars are a step backwards from human dignity.   However,  a  war  waged  unilaterally  by  technological systems where man is absent can increase this dehumanization.

3.  To  decide  if  this  or  that  action  is  legal  or  legitimate  from  an  ethical  point  of  view,  it  is  necessary to refer  to norms, to principles,  whose  application  to particular contexts demands the  capacity  for  interpretation  and  appreciation,  which  are  not  easily  translatable  into  algorithms. A  tradition,  coming  from  Aristotle  and  Thomas  Aquinas,  has  defined  “prudence”  as  the  virtue by which universal knowledge is applied to particular contingent realities.

4.  Another important aspect to which we need to be attentive is the fascination created by armed robots and the feeling of power  that  they  elicit. Their use may  be linked implicitly to  a  desire  of  omnipotence,  rather  than  the  desire  to  make  available  means  which  are proportionate  for  a  just  defense.  The  development  of  “augmented  soldiers”,  namely  of combatants  who have received unusual capacities  (perceptive, cognitive and performance) by means of a  roboticized  system (such  as exoskeletons), or completely autonomous robots endowed with  great abilities, may not come  from direct military interests, but from  dreams of power.  Our humanity is particularly recognized in our ability to restrain our own power.

5.  The roboticized weapon, particularly the one which would be autonomous, poses  important questions from the point of view of responsibility. In the event of collateral damage, caused by weapon systems controlled by a human operator, the latter is naturally recognized as the one  bearing  the  responsibility.  But  if  these  collateral  damages  are  the  result  of  an autonomous machine, even though the global responsibility would clearly be incumbent to the authority who put it to action, it will always be possible to  excuse  oneself by invoking a series of malfunctions (bugs, technical failures, misconceptions, scrambled communication, etc.) for which the authority would not be  responsible. This, in  turn, could promote the use of  such  armed  robots  because  of  the  impunity  they  allow.  The evaluation of  personal responsibility is also related to one’s intention. The taking into account of intention is central  in  applying, for example “the principle  of double effect”, characteristic of situations where an  action  causes  at  the  same  time  good  and  bad  consequences.  Indeed,  this  principle demands that we fundamentally have the intention to produce good consequences  and not bad  ones  (even  if  the  latter  appear  to  be  inevitable).  This  notion  of  intention,  equally important  for  law  as  for  ethics,  which  greatly  influences  the  question  of  responsibility, cannot be easily linked to a concept or a technically apprehend ed or apprehensible reality by today’s robotics or computers.

6.   One of the crucial points  which the ethicist will have to evaluate  is the question to know if one  can  permit  the  action  of  machines  of  which  we  cannot  entirely  predict  their behavior. One of  the conditions to be able to utilize  an armed robot is the assurance  that it will  never  produce  any  action  forbidden  a  priori  by  its  user.  However,  this  is  never guaranteed, in an absolute way , whatever the degree of sophistication of the program, due to the logical limitations that have been put in evidence by theoretical algorithms. In addition, these complex systems are not immune to bugs or computer piracy.

7.  The  economic and financial implications  of civilian and military robots are colossal. It is certain that the richer countries will profit from the advantage that is provided by roboticized weapons. Therefore,  a gap  will  develop between those  who possess and utilize this kind of combat technology and those who do not possess it. Situations of injustice will appear,  as well  as  possible  easy  violations  of  national  airspace  of  less  technologically  favored countries.  We  could  therefore  witness  to  a  widening  of  the  gap  already  existing  between nations.

Besides  these  problems,  a  race  to  obtain  roboticized  weapons,  of  ever-greater  efficiency, risks to lead to the squander of  resources, which could have been useful in other sectors such as health or education. In  conclusion,  Mr .  President,  the  arguments  presented  show  that,  among  the new  roboticized  weapon systems, it is wise to prohibit the systems  that  possess lethal capacity and that at the same  time  escape  effective human control. The prohibition we advocate is not so much concerned with  the autonomy of these systems but  the conjunction of  their lethal capacity with the  possibility of  loss of their effective control by the human person.

I thank you Mr . President.