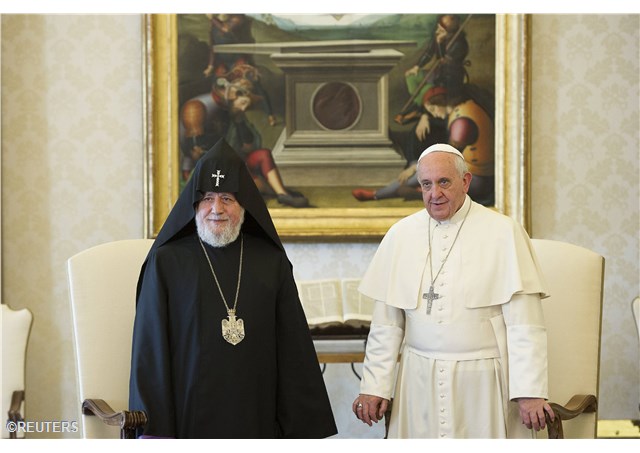 (Vatican Radio) His Holiness, Karekin II, Catholicos of All Armenians, delivered a Message at the end of the Mass celebrated in St. Peter's Basilica on Sunday, during which the Armenian monk and mystic, St. Gregory of Narek, was declared a Doctor of the Church, and the centenary of the Medz Yeghern - the mass killing of Armenians under Ottoman rule - was marked. Below, please find the official English text of the Message.

Through the merciful will of God, We visit Rome once again. We come with the President of the Republic of Armenia, Mr. Serzh Sargisyan; with Our spiritual brother, Catholicos Aram I of the Great House of Cilicia; and with the Bishops of the Armenian Church and the representatives of the Armenian faithful worldwide. With the joy of the Holy Resurrection and love of Christ, We bring Our fraternal greetings and best wishes to Your Holiness, and bring Our prayerful participation in the Holy Mass celebrated by Your Holiness in the Basilica of Saint Peter, in commemoration of the 100th anniversary of the Armenian Genocide.

During this sacred service testifying to the friendship of Our two sister Churches, to the contentment of Our people and to Us, one of our Armenian Church Fathers – Saint Gregory of Narek – was declared by Your Holiness, per the designation of the Catholic Church, a “Doctor of the Church”.  In the tenth century, St. Gregory of Narek – the teacher of prayers and bearer of the light of the universe – offered incense to heaven through his supplication of penitence and confession of all generations of mankind, by “Speaking with God from the Depths of the Heart”.  This holy monk, with his “Living Book” revered by the Armenian people, showed the way of salvation granted by the grace of Christ: “for the guilty and the just, for the brazenly haughty and the falsely modest, for the good and the evil” (Prayer 3), leading the faithful of all times to God.

Our people who gave birth to Saint Gregory of Narek, have throughout history endured countless horrors and faced calamities for their Christian faith and national identity.  One century ago, the brutal crime of genocide was committed against our people in Ottoman Turkey.  With a deliberate plan, with horrific atrocities, one and a half million Armenians were slaughtered.  Our ancient people were uprooted from their cherished cradle of life – their historic homeland – and scattered over different countries.  Our centuries-old Christian legacy heritage was ruined, obliterated, and seized.

Nothing, however, no suffering, nor persecutions, not even death caused our people to waiver or stray from their holy faith.  The greatness of the spiritual bravery of a nation’s martyrdom which our people displayed, is depicted before us today, once again proclaiming the definition of our identity, which was decreed in the fifth century: ‘Christianity for us is not clothing we put on; it is the color of our skin.’ (Yeghishé the Historian).

By the mercy of our compassionate God, our people have straightened their broken backs; new life has sprouted under the shelter of a reestablished statehood on an eastern portion of Armenia and in the communities of the Diaspora.  Our people have created their path to ascent, having faced many deprivations and difficulties.  Today, our people live under an illegal blockade implemented by Turkey and Azerbaijan; struggle for the right of our people to live free in Mountainous Karabagh, and with faith in the triumph of justice, continue efforts for the sake of our rights – for the universal recognition, condemnation, and just reparation for the Armenian Genocide.

At the time, humanity was unable to prevent the genocide of the Armenians, to eliminate its consequences, and witnessed the Holocaust and genocides in Cambodia, Rwanda, Darfur and more.  Today also, due to conflicts, wars, and terrorism, people and nations are in pain and need; are persecuted and are paying for their faith with their very lives.  We believe that the universal recognition and condemnation of the Armenian Genocide – as an effective example of the realization of justice and establishment of rights – will benefit the creation of a safe and just world.  In this sense, the 100th anniversary of the Armenian Genocide is an invitation to the world to not remain indifferent to human suffering and contemporary martyrdoms, and to invest greater efforts to stop and prevent crimes against humanity.  This is the fruit which shall grow from the roots of martyrdom.

During the celebration of this Holy Mass on the occasion of the 100th anniversary of the Armenian Genocide, before the cherished memories of our martyrs, We reflect with gratitude that Your Holiness’ predecessors of blessed memory, Benedict XV, raised His voice of protest against the genocide, and Saint John Paul II, in a joint communiqué with Us in 2001, recognized and condemned the Armenian Genocide.  In this regard, the publication of historical documents by the Vatican Archives plays an important role.  Our people remember with gratitude all those who not only spoke out and condemned the Armenian Genocide, but also implemented humanitarian missions, by caring for orphans, giving refuge to survivors, and helping them to overcome countless difficulties.

On the 100th anniversary of the Armenian Genocide, on April 23rd of this year, with the prayerful participation of sister Churches – among them the representatives of Your Holiness – and high ranking guests and thousands of our sons and daughters from throughout the world, our innumerable victims who accepted the crown of martyrdom ‘for faith and homeland’ will be canonized in the Mother See of Holy Etchmiadzin.  We will appeal for the intercession of our holy martyrs, now united with the heavenly host, for divine peace to pour over the life of mankind, and for the tragedy of genocides to no longer find a place in this world.

We share Your view that martyrdom does not recognize the differences of denominations.  Indeed, the martyrs unite us as children and servants of our one Lord Jesus Christ, to gather together and implement unified efforts for the sake of the establishment of love, justice, and peace in the world, and the promotion of dialogue between civilizations and religions, as the Holy Bible exhorts us, “And let us consider how to encourage one another to love and good works.” (Hebrews 10:24).

In this holy sanctuary of Saint Peter, let the prayers and supplications that ascend from our hearts up to heaven, be heard by our heavenly Father, to bless and guide on true paths all efforts that are made aimed at peace on earth and the secure and prosperous life of humanity.  We pray for Your Holiness’ health and the vibrancy of the Roman Catholic Church, and appeal for the protection and blessings of God for all of us, with the heartfelt words of Saint Gregory of Narek:

But you, who are capable of everything,

grant me the spirit of salvation,

the command of goodness,

the light of mercy,

the word of renewal,

the cause of pardon,

and help of the staff of life.

For you are the hope of refuge, Lord Jesus Christ,

blessed with the Father and Holy Spirit,