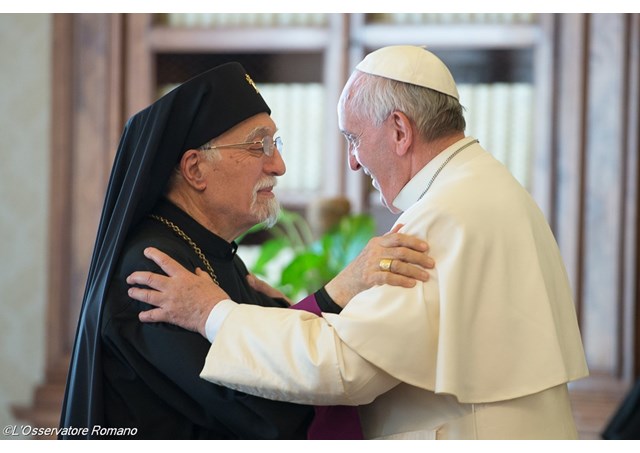 (Vatican Radio) On Divine Mercy Sunday, Pope Francis will preside at Solemn Mass for the faithful of the Armenian Rite, in commemoration of the centenary of the “Medz Yeghern” (the “Great Crime”) – the massacre of Armenians by the Ottoman government in what is now Turkey.

During the Mass, the Holy Father will inscribe the great Armenian Saint Gregory of Narek among the Doctors of the Universal Church.

Ahead of Sunday’s commemoration, Pope Francis on Thursday met with the members of the Patriarchal Synod of the Armenian Catholic Church, who will be present for Sunday’s Mass.
Christopher Wells reports:

In his prepared remarks, the Pope prayed that the Divine Mercy “might help us all, in love for truth and justice, to heal every wound and to hasten concrete gestures of reconciliation and peace among the Nations that have not yet reached a consensus on the reading of such sorrowful events.”

Pope Francis greeted not only the many Armenians who travelled to Rome with their Bishops, but also the many Armenians of the Diaspora throughout the world. He especially recalled Armenians in those places that, during the Medz Yeghern were places of safety for Armenian Christians, but are now places where Christianity itself is threatened.

The Holy Father noted the long history of Christianity in Armenia, and its rich spiritual and cultural heritage going back to 301, when Armenia became the first Christian nation. Pope Francis called on the Bishops to “always cultivate a feeling of gratitude to the Lord” for the ability to keep the Faith even in the most difficult times. He reminded them that, if the Armenian people have, in a certain sense, shared in the Passion of the Lord, their suffering nonetheless contains the seeds of His Resurrection.

Concluding his remarks, Pope Francis also paid tribute to those who worked to relieve the suffering of the Armenian people during the “Great Crime”, notably Pope Benedict XV, the Pope at the time, who intervened with the Ottoman rulers to try to halt the massacres.

Finally, Pope Francis entrusted the ecumenical dialogue between the Armenian Catholic Church and the Armenian Apostolic Church to Saint Gregory of Narek, while recognizing that the shared sufferings of one hundred years ago have already produced a certain “ecumenism of blood.”

The ecumenical aspect of Sunday’s Liturgy was also highlighted by the Catholicos Patriarch of Cilicia, Nerses Bedros XIX. The Catholicos noted that, in addition to the Armenian Catholic Bishops and faithful, representatives of the Armenian Apostolic Church – including Catholicos Karekin II of Etchmiadzin and Catholicos Aram I of Antelias – will also be present for the Liturgy, along with the President of the Republic of Armenia.