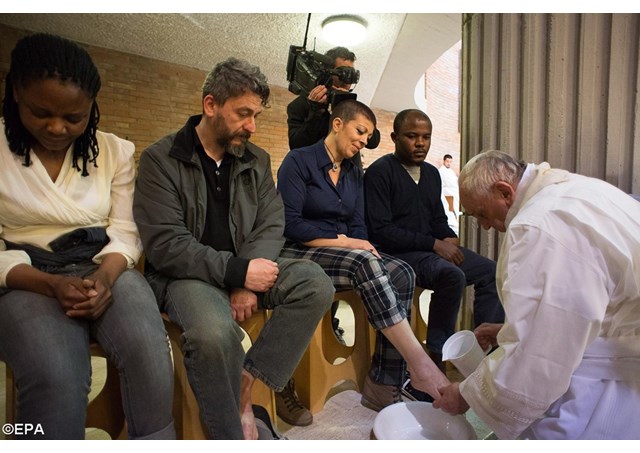 (Vatican Radio) Pope Francis on Thursday evening celebrated the Mass of the Lord's Supper at Rome's Rebibbia prison.  The Mass was also attended by inmates at a nearby women's detention centre.  During the Mass Pope Francis washed the feet of 6 men and 6 women, including one mother holding her small child in her lap.

Listen to this report by Charles Collins:

During his off-the-cuff homily, Pope Francis focused on the passage of the Gospel reading which said "He loved His own in the world, and He loved them until the end."

"He loves us without limits, until the end," Pope Francis said.  "He never tires of loving....He loves all of us, so that he would even give his own life for us."

Quoting Isaiah, Pope Francis said: "God's love has no limits – 'Even if a mom forgets her child, I won't forget you.' That's God's love for us."

During the Rite of the Washing of the Feet, several of the inmates cried as the Pope washed their feet.  One woman detainee from Africa was holding her young child, and the Pope washed his feet, too.

Earlier in his homily, the Pope has said in the time of Jesus, washing feet was the work of a slave.

"Jesus is so loving, that he became a slave to serve us, to heal us, to cleanse us," said Pope Francis.

"I also need to be cleansed by the Lord," he said. "And for this, pray during this Mass, so that the Lord also washes my sins and stains, too, so that I become more slave-like in the service of people as Jesus did."