Pope prepares to wash feet of inmates at Rebibbia prison 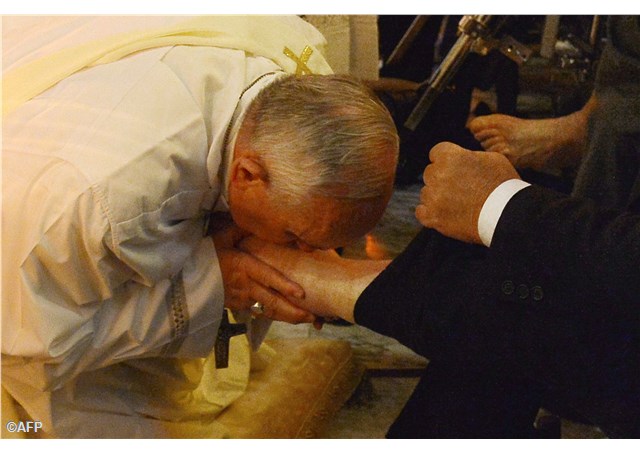 (Vatican Radio) On Holy Thursday, Pope Francis travels across Rome to meet with detainees at the Rebibbia Prison and celebrate the Mass of Our Lord’s Supper with them. During the liturgy, which recalls Jesus’ last supper with his disciples on the day before his Crucifixion, the Pope will wash the feet of 12 inmates selected from Rebibbia’s male and female detention centres.

It’s not the first time that Pope Francis has performed this gesture of service outside the traditional setting of a church or basilica: on Holy Thursday 2013, shortly after his election, he went to Rome's Casal del Marmo juvenile detention centre, where he washed the feet of young male and female offenders Last year, he presided over the Mass and foot-washing ritual at a rehabilitation facility for the elderly and people with disabilities on the outskirts of the city.

To find out more about the inmates who’ll be greeting the Pope and attending Mass in Rebibbia’ chapel, Philippa Hitchen spoke with a longtime volunteer at the prison, Maria Ponce de Leon…

Maria says she began volunteering in 1998 as part of the Italian Caritas ‘volunteers in prison’ association. There are over 100 volunteers who visit inmates in the three male and one female institutes that make up the Rebibbia complex….

The volunteers offer different kinds of support, from providing clothing, to contacting lawyers or helping the elderly to get their pensions, but the most important part is just listening to the prisoners’ stories….

Maria has visited sick inmates in the infirmary, as well as transsexuals and those in the high security section of the prison, while her current focus is on foreign detainees, especially from North African countries. They are serving sentences for all sorts of crimes, from drug trafficking to simply having an expired residence permit. In prison, she says, you find the poorest people, including the homeless, those with mental disabilities and those who have no one else to care for them…

Preparations for the papal visit

Maria says right now “the whole prison is fizzling with excitement and enthusiasm” as inmates prepare for Pope Francis to visit them. About 150 male prisoners and a similar number of female detainees will be inside the chapel with the Pope, while another 400 will be outside with volunteers and prison staff watching the Mass on several maxi screens….

Those taking part in the liturgy have been selected from amongst the regular attendants of Sunday Mass in prison and Maria says they are people of different faiths or none. The chapel, she notes, is called the 'Our Father' chapel, as it is open to everybody. Anyone from outside who visits the prison brings life to those inside, she concludes, and that is the most important thing for them.