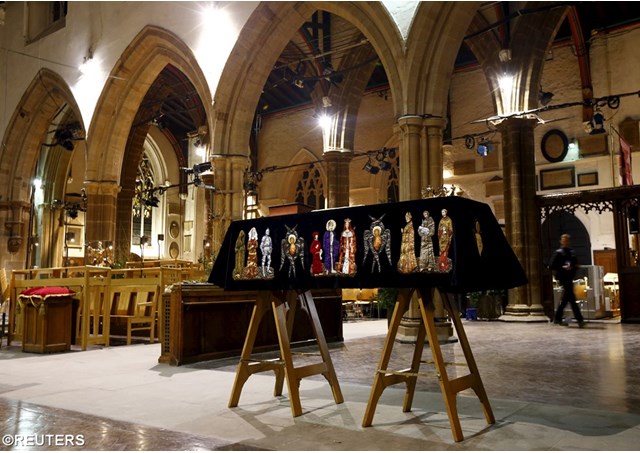 (Vatican Radio) Hundreds of people have been queuing up Monday to view the coffin of the last Plantagenet King of England, Richard III. The coffin is on public view in Leicester Cathedral until Thursday when it will be lowered into a tomb following a ceremony presided over by the Archbishop of Canterbury, Justin Welby.

Richard was killed in battle against Henry Tudor in 1485.

The University of Leicester confirmed in February 2013 that the skeleton found in an excavation under a car park in the city of Leicester, formerly the site of a Franciscan church, was that of the King.

Listen to Lydia O'Kane's interview with the Archbishop of Westminster, Cardinal Vincent Nichols

On Monday evening the Archbishop of Westminster, Cardinal Vincent Nichols is celebrating Mass for the repose of the soul of Richard III in the Holy Cross Priory in Leicester.

Speaking to Vatican Radio’s Lydia O’Kane, the Cardinal said that King Richard was a man of prayer. “the Archbishop of Canterbury when he comes to the interment on Thursday will bring with him Richard III’s book of hours, so his prayer book… and in that prayer book there an annotations and there is a prayer that Richard wrote himself, so he was clearly a man who had his own prayer book and who prayed.”

Richard III was a Catholic King in a Catholic country at the time and there have been ceremonies this week marking his internment at Leicester Cathedral celebrated by both the Anglican and Catholic Churches.

“Well, I’m glad to say”, said Cardinal Nichols, “that the co-operation between our Churches and the preparation of these events has been first class”.

On Sunday, hundreds of people in Leicester looked on as a procession carrying the coffin of King Richard made its way to Bosworth, the battlefield where the monarch was killed, before heading to the Cathedral.

Richard III was found to have had scoliosis, which is a form of spinal curvature, consistent with contemporary accounts of Richard's appearance, such as in Shakespeare’s play which paints a dark picture of the British King as a murderous villain.