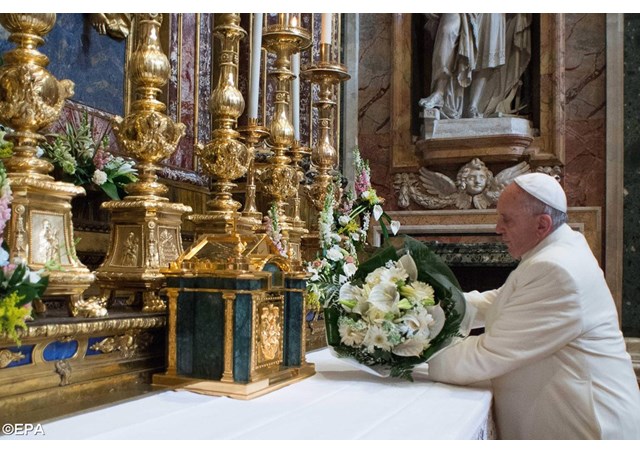 (Vatican Radio) The image of the Salus Populi Romani, the icon of Mary so dear to Pope Francis, will be centre stage during a great international vigil dedicated to life. This encounter, commemorating the twentieth anniversary of the Encyclical Evangelium vitae will take place at the Papal Basilica of Santa Maria Maggiore in Rome, on Tuesday, March 24th.

The event, prepared by the Pontifical Council for the Family, is intended particularly to give thanks for the fruit produced by the ministry of life (especially that of St. John Paul II), as well as raising awareness of the benefits of prayer for life and recalling eternal life, which is each person's destiny.

The vigil will have three successive parts: it will begin at 5:00 pm, with the reception and salutation, followed by a moment of reflection on some artistic features of the Basilica connected with life. Then, at 6:00 pm, an original Holy Rosary will be recited, with a focus on the contemplation of Gospel passages related to the theme of life, interspersed with short testimonies. At 7:00 pm, Holy Mass will be celebrated by the President of the Pontifical Council for the Family, Archbishop Vincenzo Paglia, who says that "the anniversary of the Encyclical and this vigil commemorating it on the eve of the Annunciation are particularly significant, because they highlight the intimate connection between the mystery of life and the experience of the family, composed of suffering and sociability. Defending life means, then, participating in the alliance between God, man and woman."

A Holy Rosary embracing the world

The vigil will be made even more complete and joyful by its international character. Indeed, in conjunction with the event in Rome, this important anniversary will also be celebrated in other parts of the world. In the sanctuaries of Fatima (6:30 pm), Lourdes and Guadalupe, the recitation of the Holy Rosary will be dedicated to life. Furthermore, in Nazareth, community prayer will anticipate the anniversary on March 21st.

The Vigil will be broadcast around the world. The Italian broadcaster Telepace will begin transmitting the vigil in Santa Maria Maggiore at 5:15 pm. British, French and Italian spectators will be able to take part in the prayer of the Holy Rosary at Lourdes, scheduled for 2:30 pm (local time) and transmitted by the leading American Catholic television networks; then, at 3:30 pm, by the French Catholic network KTO, and at 6:00 pm, in Italian, by TV2000.