Papal programme of liturgies for Holy Week and Easter 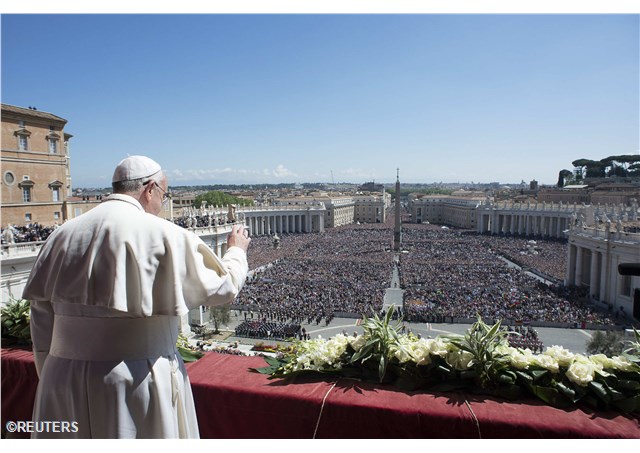 (Vatican Radio) The Vatican’s office for liturgical celebrations, headed by Msgr. Guido Marini on Friday released the full schedule of events that Pope Francis will be presiding over during Holy Week.

On Holy Thursday, April 2nd, starting at 9.30am in St Peter’s Basilica, Pope Francis will preside at the celebration of the Chrism Mass, during which the oils to be used during the coming year will be blessed.

The following day, Good Friday, the Pope will preside at the celebration of Our Lord’s Passion in St Peter’s Basilica starting at 5pm. Later in the evening, beginning at 9.15pm, he will travel across Rome to lead the traditional Via Crucis or Way of the Cross at the Colosseum and impart his Apostolic Blessing before returning to the Vatican.

On Holy Saturday, April 4th, Pope Francis will preside at the Easter Vigil in St Peter’s Basilica beginning at 8.30pm. After blessing the new fire and the Easter candle in the atrium of the Basilica, the Pope will also administer the Sacrament of Baptism before concelebrating Mass with the other cardinals and bishops.

Finally on Easter morning, Sunday April 5th, beginning at 10.15, Pope Francis will preside at the Mass of Our Lord’s Resurrection in St Peter’s Square before giving his ‘Urbi et Orbi’ blessing (to the city of Rome and to the world) from the central balcony of St Peter’s Basilica.