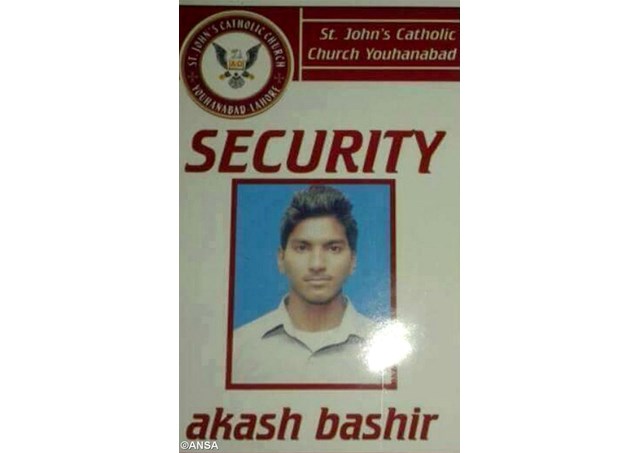 The heroic guard who on March 15 prevented a suicide bomber from entering a crowded Catholic Church in Lahore, Pakistan, sacrificed his life to avoid a large scale carnage in the place of worship.  Two suicide bombers exploded themselves near St. John’s Catholic Church and the Protestant Christ ‎Church, some 600 meters apart, in Lahore’s predominantly Christian neighborhood of Youhannabad on ‎Sunday as the faithful were gathered inside.‎  In the attack on the two churches, claimed by Tehreek-e-Taliban Pakistan Jamaatul Ahrar (TTP-JA), 17 people died and more than 70 were wounded.

Akash Bashir, the heroic security guard at St. John’s Church was a past pupil of the Don Bosco Technical Centre (DBTC) located in Youhannabad.  Akash Bashir was standing together with another security guard at the main gate of the church, checking those who entered. The suicide bomber approached the entrance and tried violently to get past the two young guards. When Akash stopped him he noticed the explosives hidden under his jacket. He grabbed hold of the attacker and the lower part of his body was blown off in the explosion, but saved the lives of many other people.  His identity was confirmed on March 17 as details of the story of what happened gradually became clear.

The funeral of Akash Bashir and others was held on March 17.   Akash’s father said that his 19-year old son had always aspired to be a great man. “His mother once asked him to stop standing at the church’s gate. He replied that he wanted to make people safer and did not care for his own life,” the elder Bashir said. He said that Akash and his sacrifice should be remembered.

Meanwhile the climate of violence and insecurity in the city has not lessened. The Salesian centre will remain closed until security can be guaranteed.  Today some young people cannot even return to their homes, because of continuing unrest and violence in the streets.  "As a Christian minority there are times when our only hope is in God and His Mother, Mary" the Salesians of Don Bosco in Lahore said.  Two other students of the Salesian school were injured as they passed in front of the Catholic Church.  “We regard these two guards as heroes who gave their lives to prevent a worse massacre," the local Salesians said.  "What happened remains for all of us involved in education in our Christian schools in Pakistan a warning that sooner or later we could easily be the new victims of such barbarity ... from Peshawar to Youhannabad,” they said.   (Source: ANS)