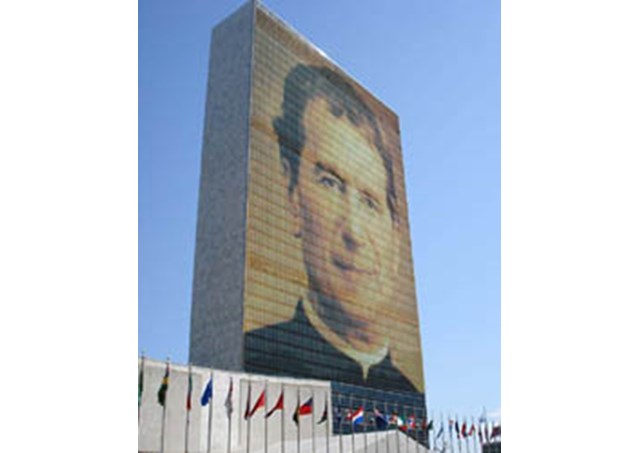 On the occasion of the 2nd birth centenary celebrations this year of Italian St. John Bosco or Don Bosco, the United Nations last week hosted an ‎event at its headquarters in New York, highlighting the theme: “Responding to the Needs of the Young and those Living in Poverty: A ‎Salesian Multi-Dimensional Response.”‎   Don Bosco, who was born 16 August 1815, founded the religious congregation of the Salesians of Don Bosco (SDB) in 1859, originally naming it the Society of St. Francis de Sales, its patron.  The March 5 UN event was a follow up of two earlier events which addressed the issue of “youth employment and youths as ‎agents of change in society” in 2013, and another in 2014 which examined “youth migration.”‎

Honduran Salesian Cardinal, Oscar Rodriguez ‎Maradiaga Archbishop of Tegucigalpa, was the keynote speaker at the third UN event celebrating Don Bosco’s charism.   The prelate who is president of Caritas Internationalis, as well as the coordinator of the Council of Cardinals, focused on the human right to water and ‎sanitation saying, “We need to be prophetic in addressing the challenges of our times.”‎

Salesian social activist Fr. Juan de la Cruz Rivadeneira, who also addressed the UN event highlighted the ‎impact of the extractive industries on the way of life, health and culture of the Shuar people in Ecuador.‎  ‎“Water is being diverted from the peoples to help operate and maintain new industries that are ‎wreaking havoc on the environment and health of the Shuar,” he said “This reality jeopardizes the ‎future of children and youth robbed of their legitimate land holdings, putting in danger their life and ‎the harmonious development of their culture and spirituality,” Fr Cruz Rivadeneira explained.‎  He concluded his presentation leading the assembly in a sing-along of “Salve Don Bosco Santo” using ‎verses Shuar youth composed to indicate their desire to preserve their way of life.‎

The Chef de Cabinet, Ambassador Arthur Kafeero of Uganda opened the UN event on behalf of Sam Kutesa, the President of the 69th Session of ‎the UN General Assembly.‎  Kafeero thanked the Salesians for their dedication to the young in Uganda for over 25 ‎years, and he stressed the need for partnering with committed civil society organizations to really have ‎a transformative agenda in the Post-2015 World.‎

Speaking at the occasion, the Holy See’s Permanent Observer to the UN, Archbishop Bernadito Auza ‎underlined the role of Salesians as educators especially of those youths who are marginalized or ‎excluded.‎  Noting the presence of the Salesians in 132 countries, Archbishop Auza acknowledged the range of ‎their preventive educational system, and noted further that the Salesians “reveal to us the open secret of ‎Don Bosco’s success, namely, educating with love and developing a healthy self-esteem among the ‎young by creative activity.”‎

Before the panel presentations, the panelists met with Kutesa, who outlined some of his priorities for ‎the session and expressed his gratitude for the work of the Salesians.‎  The representative of the Salesians at the UN, Salesian Fr Tom Brennan organized the UN event in collaboration with Miquel Rimarachin, a UN staff member and close collaborator of ‎the Salesians.‎  (Source: Matters India)