About the Jubilee of Mercy 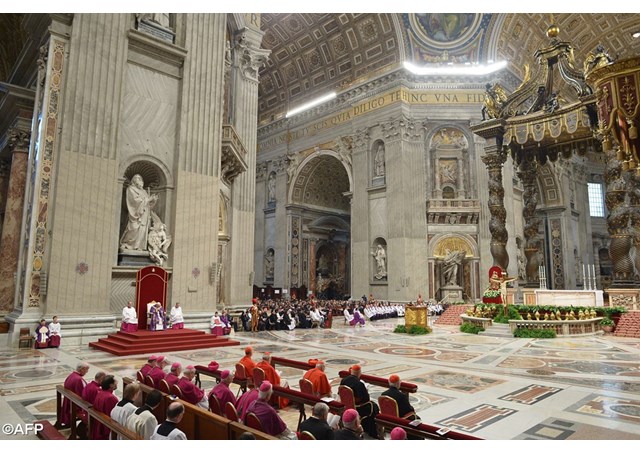 (Vatican Radio) The Pontifical Council for the New Evangelization has produced this explanatory note for the upcoming Holy Year, the Jubilee of Mercy.

In St. Peter’s Basilica, Pope Francis announced today, March 13, 2015, the celebration of an “extraordinary Holy Year”. This “Jubilee of Mercy” will commence with the opening of the Holy Door in St. Peter’s on the Solemnity of the Immaculate Conception, 2015, and will conclude on November 20, 2016 with the Solemnity of Our Lord Jesus Christ, King of the Universe. At the start of the new year, the Holy Father had stated: “This is the time of mercy. It is important that the lay faithful live it and bring it into different social environments. Go forth!”

The Jubilee announcement had been made on the second anniversary of the election of Pope Francis, during his homily for the penitential liturgy with which the Holy Father opened the “24 Hours for the Lord”. This initiative, proposed by the Pontifical Council for the Promotion of the New Evangelization, promotes throughout the world the opening of churches for an extended period of time for the purpose of inviting people to the celebration of the Sacrament of Reconciliation. The theme for this year has been taken from the Letter of St. Paul to the Ephesians, “God rich in mercy” (Eph 2:4).

The opening of this next Jubilee will take place on the fiftieth anniversary of the closing of the Second Vatican Council in 1965. This is of great significance, for it impels the Church to continue the work begun at Vatican II.

During the Jubilee, the Sunday readings for Ordinary Time will be taken from the Gospel of Luke, the one referred to as “the evangelist of mercy”. Dante Alighieri describes him as “scriba mansuetudinis Christi”, “narrator of the meekness of Christ”. There are many well-known parables of mercy presented in the Gospel of Luke: the lost sheep, the lost coin, the merciful father.

The official and solemn announcement of the Holy Year will take place with the public proclamation of the Bolla in front of the Holy Door on Divine Mercy Sunday, the Feast instituted by Saint John Paul II and celebrated on the Sunday after Easter.

In the ancient Hebrew tradition, the Jubilee Year, which was celebrated every 50 years, was meant to restore equality among all of the children of Israel, offering new possibilities to families which had lost their property and even their personal freedom. In addition, the Jubilee Year was a reminder to the rich that a time would come when their Israelite slaves would once again become their equals and would be able to reclaim their rights. “Justice, according to the Law of Israel, consisted above all in the protection of the weak” (St. John Paul II, Tertio millenio adveniente 13).

The Catholic tradition of the Holy Year began with Pope Boniface VIII in 1300. Boniface VIII had envisioned a Jubilee every century. From 1475 onwards – in order to allow each generation to experience at least one Holy Year – the ordinary Jubilee was to be celebrated every 25 years. However, an extraordinary Jubilee may be announced on the occasion of an event of particular importance.

Until present, there have been 26 ordinary Holy Year celebrations, the last of which was the Jubilee of 2000. The custom of calling extraordinary Jubilees dates back to the XVI century. The last extraordinary Holy Years, which were celebrated during the previous century, were those in 1933, proclaimed by Pius XI to celebrate XIX hundred years of Redemption and in 1983, proclaimed by John Paul II on the occasion of the 1950 years of Redemption.

The Catholic Church has given to the Hebrew Jubilee a more spiritual significance. It consists in a general pardon, an indulgence open to all, and the possibility to renew one’s relationship with God and neighbor. Thus, the Holy Year is always an opportunity to deepen one’s faith and to live with a renewed commitment to Christian witness.

With the Jubilee of Mercy, Pope Francis focuses attention upon the merciful God who invites all men and women to return to Him. The encounter with God inspires in one the virtue of mercy.

The initial rite of the Jubilee is the opening of the Holy Door. This door is one which is only opened during the Holy Year and which remains closed during all other years. Each of the four major basilicas of Rome has a Holy Door: Saint Peter’s, St. John Lateran, St. Paul Outside the Walls and St. Mary Major. This rite of the opening of the Holy Door illustrates symbolically the idea that, during the Jubilee, the faithful are offered an “extraordinary pathway” towards salvation.

The Holy Doors of the other Basilicas will be opened after the opening of the Holy Door of St. Peter’s Basilica.

Mercy is a theme very dear to Pope Francis, as is expressed in the episcopal motto he had chosen: “miserando atque eligendo”. This citation is taken from the homily of Saint Bede the Venerable during which he commented on the Gospel passage of the calling of Saint Matthew: “Vidit ergo lesus publicanum et quia miserando atque eligendo vidit, ait illi Sequere me” (Jesus therefore sees the tax collector, and since he sees by having mercy and by choosing, he says to him, ‘follow me’). This homily is a tribute to divine mercy. One possible translation of this motto is “With eyes of mercy”.

During the first Angelus after his elections, the Holy Father stated: “Feeling mercy, that this word changes everything. This is the best thing we can feel: it changes the world. A little mercy makes the world less cold and more just. We need to understand properly this mercy of God, this merciful Father who is so patient” (Angelus, March 17, 2013).

In his Angelus on January 11, 2015, he stated: “There is so much need of mercy today, and it is important that the lay faithful live it and bring it into different social environments. Go forth! We are living in the age of mercy, this is the age of mercy”. Then, in his 2015 Lenten Message, the Holy Father expressed: “How greatly I desire that all those places where the Church is present, especially our parishes and our communities, may become islands of mercy in the midst of the sea of indifference!”

In the English edition of the Apostolic Exhortation Evangelii gaudium the term mercy appears 32 times.

Pope Francis has entrusted the Pontifical Council for the Promotion of the New Evangelization with the organization of the Jubilee of Mercy.

1390: proclaimed by Urban VI, presided over by Boniface IX

1475: proclaimed by Paul II, presided over by Sixtus IV

1550: proclaimed by Paul III, presided over by Julius III

1775: proclaimed by Clement XIV, presided over by Pius VI

In the years 1800 and 1850, due to the political circumstances of the times, there were no jubilees.