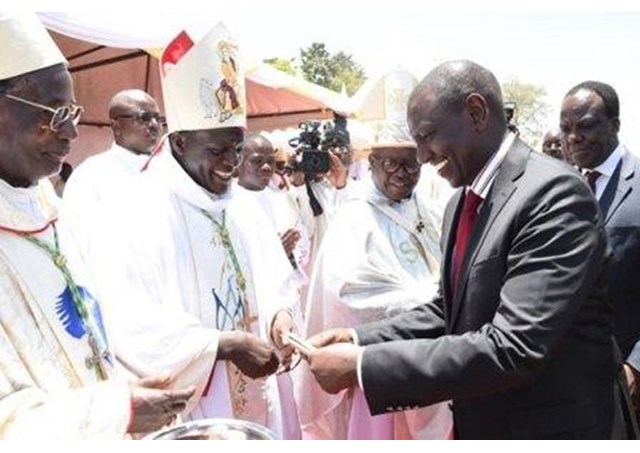 The newly ordained Bishop for the Catholic Diocese of Kakamega in Kenya, Bishop Joseph Obanyi Sagwe, has been encouraged to “know the smell of (his) sheep” as he begins his new ministry as the second Bishop of the diocese in Western Kenya.

The advice came from the Bishop Emeritus of Kakamega Diocese Philip Sulumeti, when he presided at the ordination of his successor in a colourful and animated ceremony. The ordination took place at Kakamega’s Bukhungu Stadium on Saturday 7 March.

“The shepherd must know the smell of his sheep,” Bishop Emeritus told his successor and added, “A Bishop should strive to serve, rather than to rule, because being Bishop is not a title of honour but rather a function.”

Bishop Sulumeti’s words echo those of Pope Francis who, since his election in March 2013, has insisted on having Church leaders who live with, love, care, and show concern for the people they serve, memorably describing them as “shepherds who have the smell of their sheep.”

Bishop Emeritus encouraged his successor, a native of Kissi ethnic group, to learn Luhya, the language of the people of Kakamega Diocese. The  Diocese of Kakamega covers the whole Kakamega territory and Vihiga Counties, explaining that the knowledge of language of the inhabitants of his diocese would facilitate his knowing “the smell of the sheep” he will be shepherding.

The Deputy President of Kenya, William Ruto, who represented the President of Kenya at the Saturday event, also encouraged the new Bishop to learn Luhya language in order “to journey well with the people” under his pastoral care.

The Deputy President confirmed the government’s commitment to dialoguing with Church leaders in Kenya “for the good of all the citizens”, describing Catholic Church leaders as key stakeholders in the education and health sectors.

The Deputy President was responding to John Cardinal Njue’s plea to the government to foster dialogue with the Church in Kenya on matters affecting ordinary citizens in the country.

Catholic Bishops in Kenya have been opposed to the nationwide Tetanus Vaccination Campaign targeting 2.3 million Kenyan women and girls of reproductive age between 15-49 years, terming the campaign a secret government plan to sterilize women and control population growth.

The representative of the Pope in Kenya (and South Sudan), Archbishop Charles Daniel Balvo thanked Bishop Emeritus Sulumeti for his 43 years of service as Bishop, Bishop Obanyi for his generosity in accepting the “unexpected” appointment as Bishop of Kakamega, and Bishop Joseph Mairura Okemwa for accepting to “lose” a worthy helper from Kissi diocese to Kakamega.

Until his appointment as Bishop of Kakamega by Pope Francis on 5 December 2014, Bishop Obanyi who marks his 48th birthday on Tuesday, was Vicar General of Kissi diocese.

Addressing the thousands who gathered to witness his episcopal ordination, Bishop Obanyi prayed for a spirit of collaboration from the clergy and the religious in Kakamega Diocese and urged the laity to unite with him as their “humble shepherd” in order to grow in faith.

“What you have done may take a long time to forget,” Bishop Obanyi told his predecessor, thanking him for his leadership and wishing him all the best in his retirement.

Kakamega Diocese was established in 1978, with Bishop Emeritus Sulumeti as its first bishop.

According to the booklet prepared for the Saturday liturgy, the diocese has a total population of 790,588 Catholics, 107 diocesan priests, 3 deacons, 450 religious men and women, and 47 major seminarians.

The motto of the new bishop is from Psalm 116:13, Calicem salutaris accipiam (I will raise the cup of salvation).