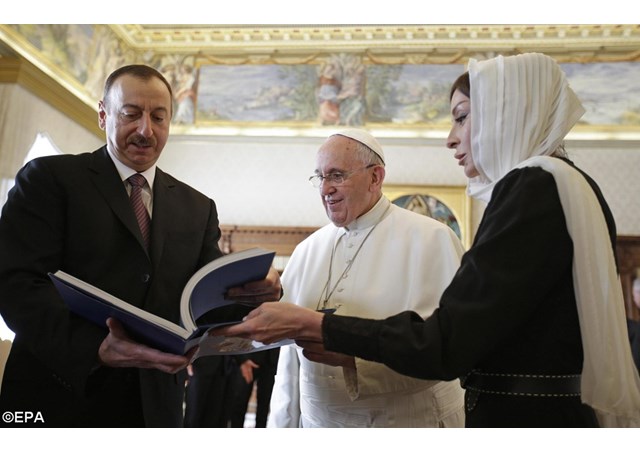 (Vatican Radio) The importance of inter-religious dialogue and of negotiation in conflict resolution were among the key topics discussed when Pope Francis received in audience on Friday, the Azerbaijani President Ilham Aliyev and his wife.

Please find below a translation into English of a communique issued by the Holy See’s Press Office for more details.

On the morning of Friday 6 March 2015, the President of the Republic of Azerbaijan, His Excellency Mr. Ilham Aliyev, with his wife, was received in Audience by the Holy Father Pope Francis. He subsequently met with His Eminence Cardinal Secretary of State Pietro Parolin,accompanied by the under Secretary for Relations with States, Msgr. Antoine Camilleri.

During the cordial discussions, satisfaction was expressed for the development of bilateral relations. In particular, attention was paid to themes regarding the life of the Catholic Community in the country and to a number of initiatives in the culture field, revealing the value in the contemporary world of intercultural and interreligious dialogue to promote peace.

Reference was then made to the current regional and international situation, emphasising the importance of negotiation in conflict resolution, and education for promoting the conditions for peaceful coexistence between populations and different religious groups.