Pope at Santa Marta: An invitation to do good 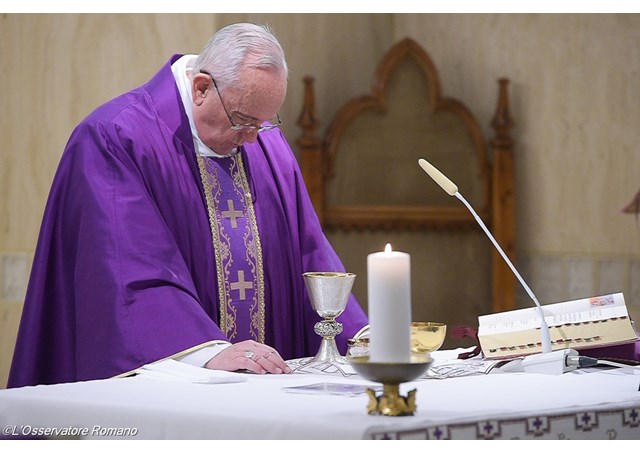 (Vatican Radio)  God “generously forgives” those who “learn to do good”, but what he doesn’t forgive is “hypocrisy and fake saints”, said Pope Francis at Mass Tuesday morning in Casa Santa Marta chapel.

Pope Francis said that there has never been any doubts that God prefers “sanctified sinners” – people who, despite their past sins, learn how to do a greater good -- to “fake saints” – people who are more concerned with appearing saintly than doing good.

The Pope was reflecting on the first reading from Isaiah, which he described as an "invitation and an imperative" that comes directly from God: "Cease to do evil, learn to do good" defending orphans and widows, namely "those who no one remembers".  Pope Francis said this category includes the "abandoned elderly", "children who do not go to school", and those "who do not know how to make the sign of the Cross". Essentially it is an invitation to conversion:

"But how can I convert? 'By learning to do right!'. Conversion. You cannot remove the filth of the heart as you would remove a stain: we go to the dry cleaner and leave cleansed ... This filth is removed by 'doing': taking a different path, a different path from that of evil. 'Learn to do right!', That is, the path of doing good. And how do I do good? It’s simple! 'Seek justice, encourage the oppressed, defend the orphan, plead for the widow'. Remember that in Israel the poorest and most needy were orphans and widows: do justice to them, go there to the wounds of humanity, where there is so much pain ... And by doing so, by doing good, you will cleanse your heart ".

Pope Francis continued that a cleansed heart is promised God’s forgiveness.  God does not keep account of the sins of those who concretely love their neighbors.  "If you do this, if you take this path to which I invite you - the Lord tells us - 'though your sins be as scarlet, they shall be as white as snow'. It is an exaggeration, the Lord exaggerates: but it is the truth! The Lord gives us the gift of His forgiveness. The Lord forgives generously. 'I forgive you this much, then we'll see about the rest....' No, no! The Lord always forgives everything! Everything! But if you want to be forgiven, you must set out on the path of doing good. This is the gift! '.

Pope Francis went on to say the Gospel of the day, instead, presents the hypocrisy of the Pharisees and Scribes. He was reflecting on people "who say all the right things, but do the exact opposite."

"We are all clever and always find a path that is not right, to seem more virtuous than we are: it is the path of hypocrisy". "They pretend to convert, but their heart is a lie: they are liars! It 'a lie ... Their heart does not belong to the Lord; their heart belongs to the father of all lies, Satan. And this is fake holiness. Jesus preferred sinners a thousand times to these. Why? Because sinners told the truth about themselves. 'Get away from me, Lord, I am a sinner!': Peter once said. One of those [the hypocrites] never says that! 'Thank you Lord, that I am not a sinner, that I am righteous  ... In the second week of Lent we have these three words to think about, to ponder: the invitation to conversion; the gift that the Lord will give us, which is great forgiveness, a great forgiveness; and the trap -- that is, pretending to convert, while choosing the path of hypocrisy".