Pope at Santa Marta: Slain because they were Christian 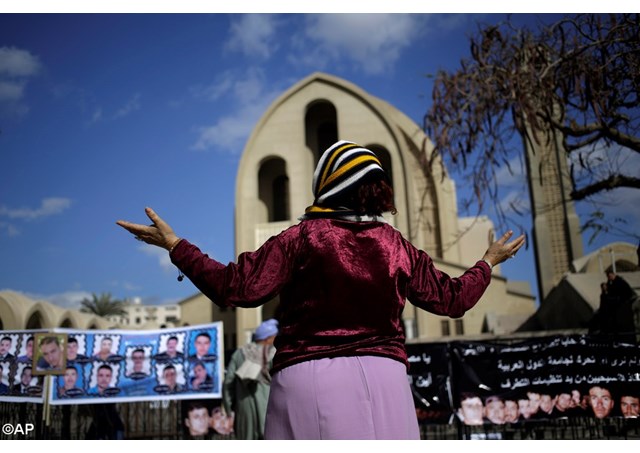 (Vatican Radio) Pope Francis offered Mass Tuesday morning for the repose of the souls of the twenty-one Coptic Christians martyred for their faith in Christ. The Mass was attended by the Pope’s personal secretary, Abuna Yoannis Lahzi Gaid, who is Coptic Catholic.

As he prepared to begin Mass in the Santa Marta Chapel, the Pope invited the congregation to join him in prayer for ‘our brother Copts, whose throats were slit for the sole reason of being Christian, that the Lord welcome them as martyrs, for their families, for my brother Tawadros, who is suffering greatly’.

He then prayed: “Be my protector, O God, a mighty stronghold to save me. For you are my rock, my stronghold! Lead me; guide me, for the sake of your name”.

Monday evening the Pope had made a personal phone call to Patriarch Tawadros, who is the Coptic Orthodox Patriarch of Alexandria, to express his sorrow at the brutal murder.

During his homily the Pope spoke of man’s capability for evil and destruction and condemned what he termed ‘merchants of death’, business people who sell arms to those at war, furthering a cycle of hate, fratricide and violence.

Pope Francis was reflecting on the passage from Genesis that speaks of God’s wrath at man’s wickedness that is a prelude to the great flood. The Pope noted with regret that man, "seems to be more powerful than God", because he is capable of destroying the good things that God has made.

Man is capable of destroying fraternity

Pope Francis pointed out that in the first chapters of the Bible we find many examples - Sodom and Gomorrah, the Tower of Babel - in which man reveals his wickedness. "An evil that lurks in the depths of the heart”.

The Pope noted some people would urge him not to be so negative, but – he continued – “this is the truth. We are also capable of destroying fraternity: Cain and Abel in the first pages of the Bible. They destroy fraternity. This is where wars begin. Jealousy, envy, so much greed for power, to have more power. Yes, this sounds negative, but it is realistic. You only have to pick up a newspaper, any newspaper – left-wing, center, right-ring ... whatever. And you will see that more than 90% of the news is news of destruction. More than 90%. We see this every day".

Pope Francis then asked the question: "What is happening in man’s heart?". He said Jesus reminds us that "from within, out of the heart of man, comes evil." Our "weak heart is wounded”.

Merchants of death sell arms to those who are at war

Pope Francis observed that man always "desires autonomy": "I do what I want and if I want to do something, I will! So, if I want to make war, I will!

"Why are we like this? Because we are capable of destruction, that’s the problem.  There are wars, arms trafficking ... 'But, we are businessmen!' Yes, but of what? Of death? And there are countries that sell weapons, are at war with one side but also selling weapons to them, so that the war continues. A capacity for destruction.  It’s not coming from our neighbors: it’s coming from us! ‘Every intention of the thoughts of his heart was only evil continually’. Everyone has this seed within, this possibility, but we also have the Holy Spirit who saves us! We must choose, in the little things".

Pope Francis went on to warn against using gossip or slander against our neighbor: "Even in parishes and associations", "jealousy" and "envy" can push people to go to their pastor to speak ill of others.

He warned: "This is evil and we all have this ability to destroy". As Lent begins, the Church “invites us to reflect on this”. Pointing to today's Gospel where Jesus rebukes the disciples who are arguing among themselves about having forgotten to bring bread. The Lord tells them to “watch out,
guard against the leaven of the Pharisees and the leaven of Herod".  He gives the example of two people: Herod who "is bad, a murderer, and the Pharisees who are hypocrites." In doing so, Jesus reminds them of when he broke the five loaves and urges them to think of the Salvation, of what God has done for all of us. Pope Francis went on to note that "they did not understand, because their hearts were hardened by this passion, by this evil need to argue among each other and see who was guilty of having forgotten the bread".

Choosing to do good thanks to the strength Jesus gives us

Pope Francis said we have to take the Lord’s message "seriously". “There is nothing strange in this, these are not the words of a Martian", "man is able to do so much good", he continued citing the example of Mother Teresa, "a woman of our time".  All of us, he said, "are capable of doing good, but we are also all capable of destruction; destruction great and small and even within our own family.  [We are capable of destroying] our children", not allowing them to grow "in freedom, not helping them to mature; cancelling out our children”.  We are capable of this and this means that we need to constantly “meditate, pray, discuss things with each other, so as not to fall into this evil that destroys everything":

During Lent, we pray not to be misled by temptations

The Pope concluded: "We ask the Lord, today, before the beginning of Lent for this grace: to always choose the right path with his help and not be misled by temptations down the wrong path."