Pope Francis: Cardinals are servants of the Church 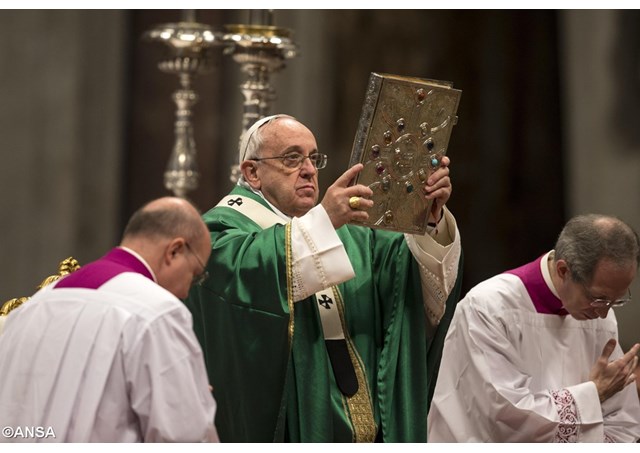 (Vatican Radio) Pope Francis presided over Mass in St Peter's Basilica on Sunday, to offer thanks to God together with the College of Cardinals, one day after bestowing the Red Hat on twenty new prelates from around the world. Below, please find the official English translation of the Holy Father's homily.

“Lord, if you choose, you can make me clean”…  Jesus, moved with compassion, stretched out his hand and touched him, and said: “I do choose.  Be made clean!” (Mk 1:40-41).  The compassion of Jesus!  That com-passion which made him draw near to every person in pain!  Jesus does not hold back; instead, he gets involved in people’s pain and their need…  for the simple reason that he knows and wants to show com-passion, because he has a heart unashamed to have “compassion”.

“Jesus could no longer go into a town openly, but stayed in the country; and people came to him from every quarter” (Mk 1:45).  This means that Jesus not only healed the leper but also took upon himself the marginalization enjoined by the law of Moses (cf. Lev 13:1-2, 45-46).  Jesus is unafraid to risk sharing in the suffering of others; he pays the price of it in full (cf. Is 53:4).

Compassion leads Jesus to concrete action: he reinstates the marginalized!  These are the three key concepts that the Church proposes in today’s liturgy of the word: the compassion of Jesus in the face of marginalization and his desire to reinstate.

Marginalization:  Moses, in his legislation regarding lepers, says that they are to be kept alone and apart from the community for the duration of their illness.  He declares them: “unclean!” (cf. Lev 13:1-2, 45-46).

Imagine how much suffering and shame lepers must have felt: physically, socially, psychologically and spiritually!  They are not only victims of disease, but they feel guilty about it, punished for their sins!  Theirs is a living death; they are like someone whose father has spit in his face (cf. Num 12:14).

In addition, lepers inspire fear, contempt and loathing, and so they are abandoned by their families, shunned by other persons, cast out by society.  Indeed, society rejects them and forces them to live apart from the healthy.  It excludes them.  So much so that if a healthy person approached a leper, he would be punished severely, and often be treated as a leper himself.

The purpose for this rule was “to safeguard the healthy”, “to protect the righteous”, and, in order to guard them from any risk, to eliminate “the peril” by treating the diseased person harshly.  As the high priest Caiaphas decreed: “It is better to have one man die for the people than to have the whole nation destroyed” (Jn 11:50).

Reinstatement:  Jesus revolutionizes and upsets that fearful, narrow and prejudiced mentality.  He does not abolish the law of Moses, but rather brings it to fulfillment (cf. Mt 5:17).  He does so by stating, for example, that the law of retaliation is counterproductive, that God is not pleased by a Sabbath observance which demeans or condemns a man.  He does so by refusing to condemn the sinful woman, but saves her from the blind zeal of those prepared to stone her ruthlessly in the belief that they were applying the law of Moses.  Jesus also revolutionizes consciences in the Sermon on the Mount (cf. Mt 5), opening new horizons for humanity and fully revealing God’s “logic”.  The logic of love, based not on fear but on freedom and charity, on healthy zeal and the saving will of God.  For “God our Saviour desires everyone to be saved and to come to the knowledge of the truth” (1 Tim 2:3-4).  “I desire mercy and not sacrifice” (Mt 12:7; Hos 6:6).

Jesus, the new Moses, wanted to heal the leper.  He wanted to touch him and restore him to the community without being “hemmed in” by prejudice, conformity to the prevailing mindset or worry about becoming infected.  Jesus responds immediately to the leper’s plea, without waiting to study the situation and all its possible consequences!  For Jesus, what matters above all is reaching out to save those far off, healing the wounds of the sick, restoring everyone to God’s family!  And this is scandalous to some people!

Jesus is not afraid of this kind of scandal!  He does not think of the closed-minded who are scandalized even by a work of healing, scandalized before any kind of openness, by any action outside of their mental and spiritual boxes, by any caress or sign of tenderness which does not fit into their usual thinking and their ritual purity.  He wanted to reinstate the outcast, to save those outside the camp (cf. Jn 10).

There are two ways of thinking and of having faith: we can fear to lose the saved and we can want to save the lost.  Even today it can happen that we stand at the crossroads of these two ways of thinking.  The thinking of the doctors of the law, which would remove the danger by casting out the diseased person, and the thinking of God, who in his mercy embraces and accepts by reinstating him and turning evil into good, condemnation into salvation and exclusion into proclamation.

These two ways of thinking are present throughout the Church’s history: casting off and reinstating.  Saint Paul, following the Lord’s command to bring the Gospel message to the ends of the earth (cf. Mt 28:19), caused scandal and met powerful resistance and great hostility, especially from those who demanded unconditional obedience to the Mosaic law, even on the part of converted pagans.  Saint Peter, too, was bitterly criticized by the community when he entered the house of the pagan centurion Cornelius (cf. Acts 10).

The Church’s way, from the time of the Council of Jerusalem, has always always been the way of Jesus, the way of mercy and reinstatement.  This does not mean underestimating the dangers of letting wolves into the fold, but welcoming the repentant prodigal son; healing the wounds of sin with courage and determination; rolling up our sleeves and not standing by and watching passively the suffering of the world.  The way of the Church is not to condemn anyone for eternity; to pour out the balm of God’s mercy on all those who ask for it with a sincere heart.  The way of the Church is precisely to leave her four walls behind and to go out in search of those who are distant, those on the “outskirts” of life.  It is to adopt fully God’s own approach, to follow the Master who said: “Those who are well have no need of the physician, but those who are sick; I have come to call, not the righteous but sinners to repentance” (Lk 5:31-32).

In healing the leper, Jesus does not harm the healthy.  Rather, he frees them from fear.   He does not endanger them, but gives them a brother.  He does not devalue the law but instead values those for whom God gave the law.  Indeed, Jesus frees the healthy from the temptation of the “older brother” (cf. Lk 15:11-32), the burden of envy and the grumbling of the labourers who bore “the burden of the day and the heat” (cf. Mt 20:1-16).

In a word: charity cannot be neutral, indifferent, lukewarm or impartial!  Charity is infectious, it excites, it risks and it engages!  For true charity is always unmerited, unconditional and gratuitous! (cf. 1 Cor 13).  Charity is creative in finding the right words to speak to all those considered incurable and hence untouchable.  Contact is the true language of communication, the same endearing language which brought healing to the leper.  How many healings can we perform if only we learn this language!  The leper, once cured, became a messenger of God’s love.  The Gospel tells us that “he went out and began to proclaim it freely and to spread the word” (cf. Mk 1:45).

Dear new Cardinals, this is the “logic”, the mind of Jesus, and this is the way of the Church.  Not only to welcome and reinstate with evangelical courage all those who knock at our door, but to go out and to seek, fearlessly and without prejudice, those who are distant, freely sharing what we ourselves freely received.  “Whoever says: ‘I abide in [Christ]’, ought to walk just as he walked” (1 Jn 2:6).  Total openness to serving others is our hallmark, it alone is our title of honour!

In this Eucharist which finds us gathered around the altar of the Lord, let us implore the intercession of Mary, Mother of the Church, who herself experienced marginalization as a result of slander (cf. Jn  8:41) and exile (cf. Mt 2:13-23).  May she obtain for us the grace to be God’s faithful servants.  May she - our Mother - teach us to be unafraid of tenderly welcoming the outcast; to be unafraid of tenderness and compassion.  May she clothe us in patience as we seek to accompany them on their journey, without seeking the benefits of worldly success.  May she show us Jesus and help us to walk in his footsteps.

Dear brothers, as we look to Jesus and our Mother Mary, I urge you to serve the Church in such a way that Christians - edified by our witness - will not be tempted to turn to Jesus without turning to the outcast, to become a closed caste with nothing authentically ecclesial about it.  I urge you to serve Jesus crucified in every person who is emarginated, for whatever reason; to see the Lord in every excluded person who is hungry, thirsty, naked; to see the Lord present even in those who have lost their faith, or turned away from the practice of their faith; to see the Lord who is imprisoned, sick, unemployed, persecuted; to see the Lord in the leper – whether in body or soul - who encounters discrimination!  We will not find the Lord unless we truly accept the marginalized!  May we always have before us the image of Saint Francis, who was unafraid to embrace the leper and to accept every kind of outcast.  Truly the Gospel of the marginalized is where our credibility is found and revealed!