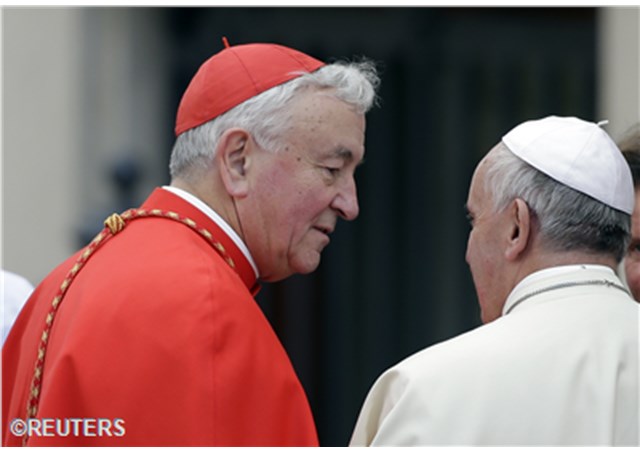 (Vatican Radio) The head of the bishops conference in England and Wales says the Church must be a model of dialogue as it seeks consensus on the reforms of the Roman Curia. Cardinal Vincent Nichols, the archbishop of Westminster was speaking during a meeting of the College of Cardinals which is preceding a public consistory to be held in St Peter’s Basilica on Saturday.

Pope Francis addressed the opening session of the meeting on Thursday, saying the goal of the ongoing reform programme is to achieve more effective collaboration between different parts of the Roman Curia and to promote collegiality between Rome and bishops conferences around the world.

Cardinal Nichols says the cardinals have emphasised the need to “deepen the spirit and ethos” of the Curia to ensure that officials are chosen not just for their competency but also for “their spirit of missionary service and generosity”.  Secondly, he notes there has been much discussion of the specific roles of the different entities of the Roman Curia and thirdly, the best ways of promoting efficient cooperation between them.

Regarding relations between the Curia and local bishops conferences, the cardinal says in past centuries the strength of the Pope’s position has defended many dioceses in dire circumstances. He notes the “strengths and needs of particular Churches” on the one hand and the “ministry of Peter” on the other – all that goes on between them must serve the whole Church.

Commenting on Pope Francis’ call for the reforms of the Curia to “promote dialogue and an ecumenical spirit”, Cardinal Nichols says “the way we operate in the Church is the first signal that we give to potential partners in dialogue”. Quoting Pope Paul VI, he says there are so many areas of conflict in the world that the Church must be modelling dialogue “within our own family”.

Commenting on perceived opposition to Pope Francis’ reform programme, the Cardinal says “structural change is always difficult” but it is also vital to go beyond that and be willing to “engage in self-assessment all the time”.

Asked about the role of lay people within the reform programme, Cardinal Nichols says there has been discussion about the different forms of authority and their relationship to Holy Orders. “It’s early days yet to see a prefect of a congregation being a lay person” he says, adding that experts in canon law may be examining this issue. While some lay people want to play a more central role in the running of the Church, he says the other challenge is to “recognise the struggle and competency of lay people putting flesh to the Gospel in their daily lives”. English