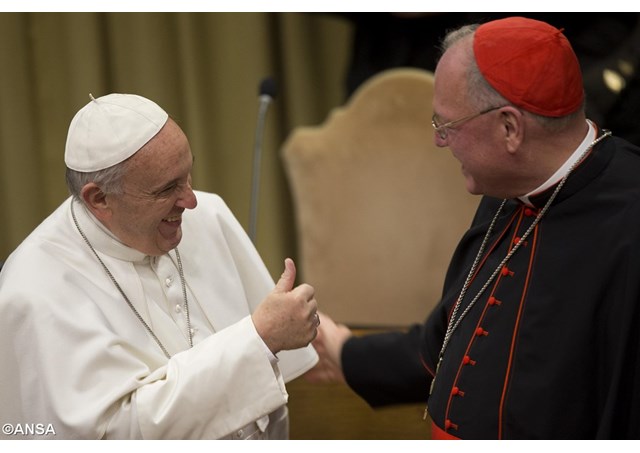 (Vatican Radio)  Pope Francis says the end goal of the reform of the Roman Curia is to harmonize work among the Vatican offices, to achieve a more effective collaboration and promote collegiality.

The Holy Father was speaking Thursday morning to the College of Cardinals at the opening session of the Extraordinary Consistory, ahead of the Ordinary Public Consistory for the creation of new cardinals on Saturday.

The College of Cardinals gathers together the Pope’s closest collaborators in the governance of the Universal Church.  Currently there are 207 members in the College, 110 of whom are Cardinal electors, that is, eligible to vote in conclave for a papal election.

The College is meeting in two closed sessions Thursday and Friday at the Synod Hall, where they will be briefed on progress in the reform of the Apostolic Constitution Pastor Bonus, in the governance of the Church.

Opening the working session – which included the 20 prelates who will be created Cardinals on Saturday – Pope Francis spoke of the recently concluded Council of Nine, thanking the Council members for their work in overseeing the reform process.

He said that “the reform is not an end in itself, but a means to give a strong Christian witness; to promote a more effective evangelization; to promote a more fruitful ecumenical spirit; to encourage a more constructive dialogue with all”.

Pope Francis also pointed out that the reform of the Curia was strongly advocated by the majority of the Cardinals in the context of the general congregations before the conclave in which he was elected Pope.

The Holy Father warned the Cardinals that the goal of reform “it is not easy to achieve”, that it “requires time, determination and above all  everyone’s cooperation”. He concluded that above all it demands prayer and openness to the guidance of the Holy Spirit.

Below please find a Vatican Radio Translation of the Holy Fathers address to the College of Cardinals.

In the words of the Psalm we give praise to the Lord who has called us together and gives us the grace to welcome the 20 new cardinals in this session. To them and to all, I give my cordial greetings. Welcome to this communion, which is expressed in collegiality.

Thanks to all those who have prepared this event, especially to His Eminence Cardinal Angelo Sodano, dean of the College of Cardinals. I thank the Commission of nine Cardinals and the coordinator, His Eminence Óscar Andrés Rodríguez Maradiaga. I also thank His Excellency Marcello Semeraro, Secretary of the Commission of Nine Cardinals: Today he will present a summary of the work done in recent months to develop the new Apostolic Constitution for the reform of the Curia. As we know, this summary has been prepared on the basis of many suggestions, even those made by the heads of the Dicasteries, as well as experts in the field.

The goal to be reached is always that of promoting greater harmony in the work of the various Dicasteries and Offices, in order to achieve a more effective collaboration in that absolute transparency which builds authentic sinodality and collegiality.

The reform, strongly advocated by the majority of the Cardinals in the context of the general congregations before the conclave, will further perfect the identity of the same Roman Curia, which is to assist the Successor of Peter in the exercise of his supreme pastoral office for the good of and in the service of the universal Church and the particular Churches. This exercise serves to strengthen the unity of faith and communion of the people of God and promote the mission of the Church in the world.

Certainly, it is not easy to achieve such a goal: it requires time, determination and above all  everyone’s cooperation. But to achieve this we must first entrust ourselves to the Holy Spirit, the true guide of the Church, imploring the gift of authentic discernment in prayer.

It is in this spirit of collaboration that our meeting begins, which will be fruitful thanks to the contribution which each of us can express with parrhesía, fidelity to the Magisterium and the knowledge that all of this contributes to the supreme law, that being the salus animarum. Thank You.