Pope Francis: The devil is the root of jealousy, war 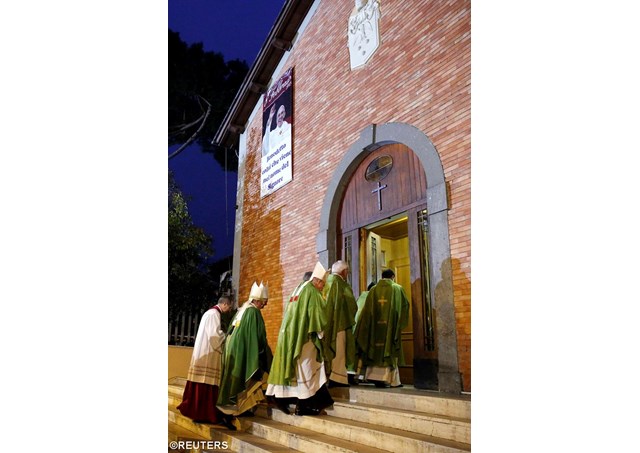 (Vatican Radio) Pope Francis on Sunday evening visited the parish of San Michele Arcangelo in the eastern Roman district of Pietralata. The parish is on the peripheries of Rome, and home to 8,000 families.

On his way to the parish, the Holy Father made a surprise visit to a shantytown called  “Campo Arcobaleno”, where he visited with residents for about 10 minutes.

After arriving at the Parish Hall, Pope Francis met with a group of homeless people who are cared for by the Sant’Egidio Community.

“The fact that people do not know your name, and call you ‘homeless’ and you carry this: It is your cross, and your patience,” said Pope Francis. “But there is something in the heart of all of you - of this, please be assured - there is the Holy Spirit.”

He then held a meeting with parents whose children had been baptized in the previous year, and asked them to teach them the Faith well, and lamented there are “Christian children who cannot make the sign of the cross.”

In his meeting with older children, many of whom were part of the Scouting movement, Pope Francis pointed out that wars are not only those – and he asked them to make a list - which kill children in Iraq, Ukraine, and Africa. Wars are come about much earlier in people who do not possess God.

“Who is the father of war?” Pope Francis asked.  “The devil!” the children answered.

Pope Francis said the devil is the “father of hate”, “the father of lies” who seeks disunity.

“But God wants unity,” Pope Francis said. “If in your heart you feel jealousy, this is the beginning of war.  Jealousies are not of God.”

And this is the theme Pope Francis continued during his homily at Mass.

“It is sad when in a family, brothers do not speak because of something stupid,” Pope Francis said.

“Because the devil takes stupidity and makes a world,” he continued. “Then these enmities continue and multiply for years.  It destroys the family: Parents suffer because their children do not speak to each other, or with the wife of a son…And so this jealousy and envy, it is sowed by the devil.  And the only one who can drive out demons is Jesus.  The only one who can heal these things is Jesus. So to each of your: Have yourself healed by Jesus.”

As he often does during parish visits, he urged the congregation to listen to Jesus in the Gospel, to read a passage and ask themselves, what does it say to me?