Light a lamp to dissipate the darkness of human trafficking 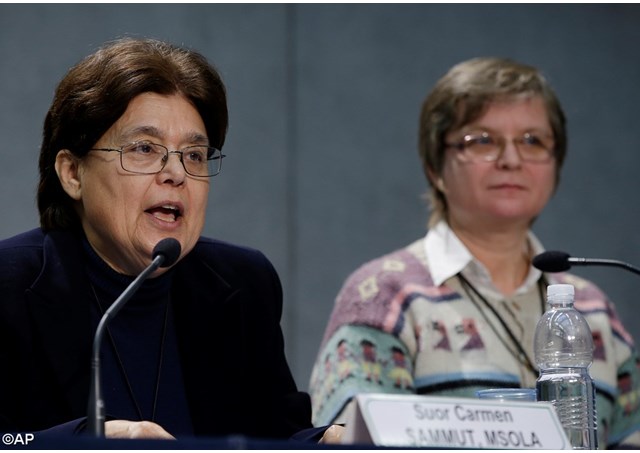 (Vatican Radio) Have the courage to look into the darkness and light a lamp against human trafficking.

That’s what men and women of goodwill across the world are being asked to do this Sunday, Febuary 8th, International Day of Prayer and Awareness against human trafficking.

The initiative, presented on Tuesday morning in the Vatican, and promoted by the International Union of Superiors General in collaboration with the Pontifical Councils of Pastoral Care, of Migrants and Itinerant People, of Justice and Peace as well as the Congregation for Institutes of Consecrated Life and Societies of Apostolic Life, has gathered force also thanks to Pope Francis’ seal of approval.

Describing the trafficking of persons as a crime against humanity, and urging all to join forces to free the victims and stop this increasingly aggressive crime, Pope Francis has given extra momentum to the work done by “Talitha Kum”: an amazing, world-wide  network of women religious who are committed to fighting the battle against this new form of slavery.

But they cannot continue to do so alone. So the International Day, which symbolically falls on the Feast day of freed Sudanese slave Saint Josephine Bakhita,  is an invitation to all to take heed and commit, in some way, to fight one of the worst examples of slavery of the XXIst century.

The sisters point out: it happens to 2 and a half million people every year. 60 percent of them are women and children. Many suffer abuse and unspeakable violence.

For traffickers – on the other hand – this is the third most lucrative activity in the world, after drugs and arms trafficking.

It is also very plausible – the sisters say – that each and every one of us has met or crossed paths with a victim. And that is why we are we are all called to take responsibility, by raising awareness, denouncing traffickers, opposing the crime.

"As for the person on the street, this is a very dangerous crime and the person on the street has to be very very careful to protect themselves so they can't just rush in there" says  Sister Imelda Poole,  President of the local Albanian Talitha Kum branch of Networking Against Trafficking and Exploitation, "but there are referrel mechanisms, and I would say to every human being: learn the referral mechanisms in your country, learn what to do if you find anything suspicous, don't just sit back and say 'I can do nothing' because everybody can do something".

And very simply we are asked, on Sunday 8th February, to pray and to light a candle to help dissipate the darkness in which so many are trapped.