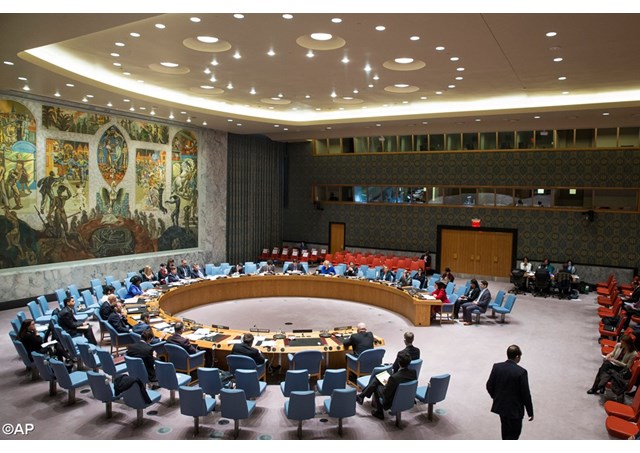 (Vatican Radio) The  Permanent Observer Mission of the Holy See to the United Nations on Friday told the UN Security Council spoke about the dangers posed to innocent civilians, especially women and girls, in armed conflicts.

“In conflict settings women  and girls are more vulnerable as a result of inequality and are directly targeted as part of fear tactics and  deliberate assaults on their rights,” said the statement, read by the Chargé d'Affaires of the Mission, Msgr. Janusz Urbańczyk.

“My delegation remains concerned about the continued lack of attention and priority to the protection of  women and girls who are targeted and attacked  purely  because of the faith they profess,” the statement continued. “The lack of  focus and priority for protecting them is troubling  when Christians face extinction in some regions of  the world and in other regions Christian schools for girls are targeted and attacked.”

The full statement of the Holy See Observer Mission is below:

at the Security Council Open Debate on

Protection of Civilians in Armed Conflict:

Protection challenges and needs faced by women and girls

in armed conflict and post-conflict settings

My delegation wishes to congratulate Chile for its Presidency of the Security Council and for convening  this important debate  on protection, challenges and needs faced by women and girls in armed conflict  and post conflict settings.  Today’s discussion provides a much needed opportunity to focus on the impact  of violence on women and girls in conflict settings and to  identify the initiatives that must be undertaken  to eradicate this scourge, that continues to escalate.

The Holy See firmly opposes recourse to armed conflict as a means of solving disputes and recognizes  that women and girls suffer disproportionately from the ravages of conflict. In conflict settings women  and girls are more vulnerable as a result of inequality and are directly targeted as part of fear tactics and  deliberate assaults on their rights. Although  a  focus  on  women’s  protection  and  inclusion  has  been  a  mainstay  of  the  Council’s  deliberations,  many  gaps  remain  and  must  be  addressed  by  this  august  body.  Through  a  series  of  resolutions, this Security Council has recognized that further steps must be taken to protect women and  girls in  conflict  and post-conflict situations  and to  examine the unique impact  of  armed  conflict  on  women and girls. However, reports of violence committed against women in the most brutal and horrific  forms, including sexual slavery, rape and trafficking are increasing.

The belief in the sanctity of human life and inherent dignity of the human person is the foundation of  the principles of Catholic Social teaching. All persons, women and men, girls and boys, by virtue of  their human dignity are free and equal. Violence in all its forms is an affront to human dignity and, moreover, sexual violence against women tears at the very fabric of society. This was pointed out by His Holiness Pope Francis, when he emphasized that we must not “overlook  the fact that wars involve another horrendous crime, the crime of rape. This is a most grave offense  against the dignity of women, who are not only violated in body but also in spirit, resulting in a trauma  hard to erase and with effects on society as well. Sadly, even apart from situations of war, all too many  women even today are victims of violence.”

Armed conflict affects the security of the entire community and of the family in particular. It causes

displacement, forcing families to flee and stable communities to  disintegrate. Ripped from their land  and rich history  families and entire communities are vulnerable and exploited as outsiders in foreign  lands.

In addition, mainly men are called to fight in situations of armed conflict, leaving their family behind to  fend  for  itself.  Without  the  protection  of  their  husband  or  father,  women  and  girls  in  particular  are  vulnerable to exploitation and gross human rights violations with the possibility of becoming the prey  of terrorist networks.

My delegation remains concerned about the continued lack of attention and priority to the protection of  women and girls who are targeted and attacked  purely  because of the faith they profess. The lack of  focus and priority for protecting them is troubling  when Christians face extinction in some regions of  the world and in other regions Christian schools for girls are targeted and attacked. This is a shared  reality of members of all faiths and therefore requires the shared commitment of members of all faiths and governments strongly to condemn and confront such violence

As Pope Francis noted, acts of violence continue to strike indiscriminately and there is an alarming  increase  in  kidnapping,  particularly  of  young  girls  who  are  made  objects  of  trafficking.   This  is  an  abominable trade that must come to an end. This scourge must be eradicated, since it strikes all of us,  from individual families to the entire international community. Mister President, The Catholic Church through her institutions and agencies around the world is providing assistance, care and  support  to  thousands  of  survivors  of  sexual  violence  in  situations  of  armed  conflict.   These  institutions and their courageous individuals sacrifice themselves on a daily basis and many of these  have paid dearly for their  endeavors. Because  of this permanent  local presence in  the world’s most  disaster prone areas, this network of Catholic institutions and agencies do respond rapidly and effectively  to address the consequence of violence in armed conflict.

In conclusion, as Pope Francis recently noted in his address to the Diplomatic Corps accredited to the Holy See, we must reject the “culture of enslavement” which is incapable of doing good or pursuing  peace and accepts as inevitable the spread of war and violence. We must redouble our efforts to replace  this “culture” with a culture of life and peace in which governments and the international community  fulfill their fundamental responsibility to protect all people