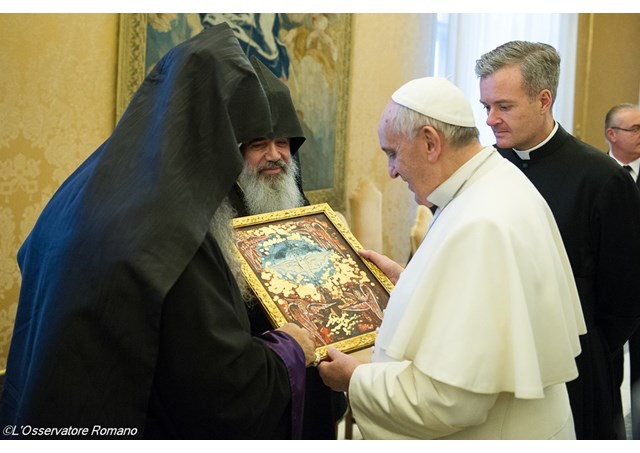 (Vatican Radio) Pope Francis on Friday received the participants in a meeting -this week - of the Joint International Commission for Theological Dialogue between the Catholic Church and the Oriental Orthodox Churches.

The Oriental Orthodox Churches those Orthodox Eastern Christian churches which recognize only the first three ecumenical councils, and rejected the formulae of the Council of Chalcedon, at which certain central Christological doctrines were dogmatically defined, most especially the dual nature – fully divine and fully human, perfectly united though without mixing, blending or alteration – of Christ.

In remarks prepared for the occasion and delivered during the noon audience in the Apostolic Palace at the Vatican, Pope Francis praised the progress of the Commission in its dozen years of work, and called on all participants to continue their journey in a spirit of brotherhood. “I express my hope that this work will bear rich fruit for our common theological research and help us to experience ever more fully our fraternal friendship,” the Holy Father said.

Pope Francis went on to note, with, “dismay and deep sadness,” the ongoing conflicts and crises in the Middle East, especially in Iraq and Syria. “I join you,” he said, “in praying for a negotiated solution and in imploring God’s goodness and mercy upon all those affected by this immense tragedy.” The Holy Father continued, saying, “All Christians are called to work together, in mutual acceptance and trust, in order to serve the cause of peace and justice.  May the intercession and example of the many martyrs and saints who have borne courageous witness to Christ in all our Churches sustain and strengthen you and your Christian communities.”

Pope Francis concluded his remarks by thanking the participants for their visit, invoking the Lord’s blessings and the maternal protection of Mary on their ministry, and asking in turn for their continued prayers for him.