Pope tells Dads to spend time with their children 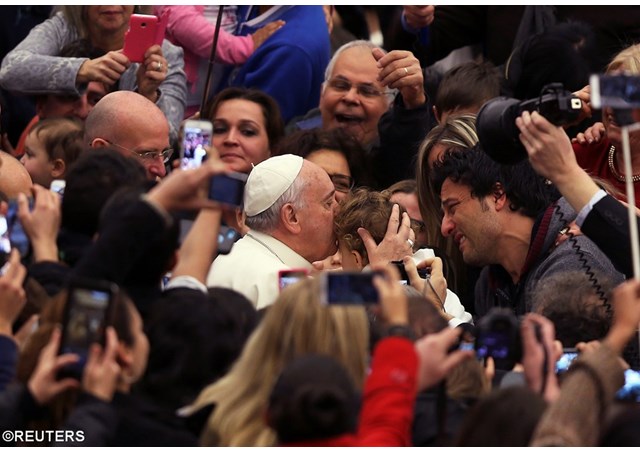 (Vatican Radio) Pope Francis called on fathers to be present in the lives of their children pointing out that the absence of a ‘father figure’ can have grave consequences.

Speaking on Wednesday during the weekly General Audience, the Pope continued in his catechesis on the family, choosing to focus on the dignity and role of fathers.

He said that teaching us to call God our Father, Jesus gave new depth and richness to this relationship, so fundamental to the life of society.

Sadly – Francis said -  in our modern societies, we are experiencing a crisis of fatherhood. In the past it was common practice to perceive the  image of the father as authoritarian and at times even repressive, today – he said - we now sense uncertainty and confusion about the role of the father.

Recalling his experience with the faithful when he was Bishop of Buenos Aires, Francis said that he was often struck by how caught up in their profession and self-realization so many contemporary fathers are. "Often" - he said - "I used to ask fathers whether they took the time to play with their children, whether they had the courage and the love to spend time with their children. And their answers were not good: I am too busy... I have too much work to do".

And speaking of  an “absence” of the father figure in society, the Pope said that “without father figures, young people often feel ‘orphaned’, left adrift at a critical moment in their growth and development.

Calling on fathers to be responsible, he said that fathers are necessary as examples and guides for our children in wisdom and virtue.

Society itself – he continued -  has a similar responsibility not to leave the young as orphans, without ideals, sound values, hopes and possibilities for work and for authentic spiritual fulfilment.

Just as Jesus promised that he would not leave us orphans – Pope Francis concluded - let us ask him to deepen and renew our appreciation of fatherhood and to raise up good fathers for the benefit of our families, our Church and our world.