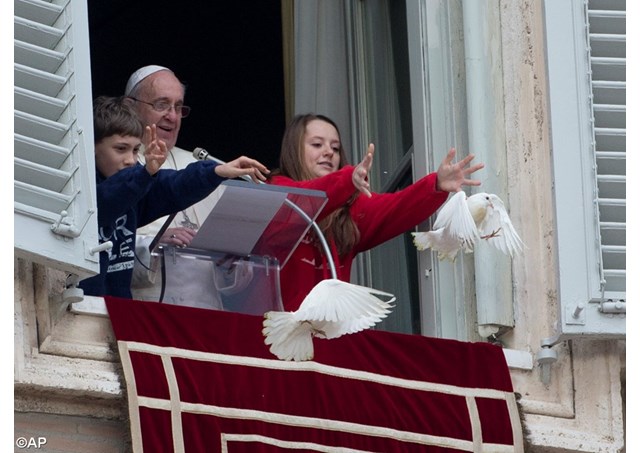 (Vatican Radio) On Sunday and before the Angelus, the Pope recalled the Week of Prayer for Christian Unity and its theme, "Give me a drink", the sentence uttered by Jesus to the Samaritan woman.

He told the faithful gathered that the "desire for unity" of the disciples of Jesus is part of our "thirst not only material for water, but above all our thirst for a full life, free from the slavery of evil and death."

He went on to say that "Jesus is the fulfillment of God's promises because it is he who gives to the Holy Spirit, the 'living water' that quenches our restless hearts, hungry for life, love, freedom, peace, thirsty for God.

Pope Francis continued on the theme of unity by saying that, “It is a bad thing that Christians are divided, Jesus wants us united, one body. Our sins, history has divided us. For this we must pray that the Holy Spirit bring us together again".

Joining the Holy Father were a boy and a girl from the Catholic Action Rome movement who were part of a group of thousands in the square marking the annual January "Caravan of Peace". They, along with Pope Francis launched white doves from the window of his studio.

Following the Angelus, the Pope also remembered the World Day for Sufferers of Leprosy, saying, “I express my closeness to all the people who suffer from this disease, as well as to those who care for them, and to those who struggle to remove the causes of the disease, that is, living conditions unworthy of man. Let us renew our commitment of solidarity to these brothers and sisters. "

And finally bringing his Angelus address to a close, and in light of his recent visit to Asia, the Holy Father had greetings for the Filipino community in Rome, thanking them for their strong and joyful faith.