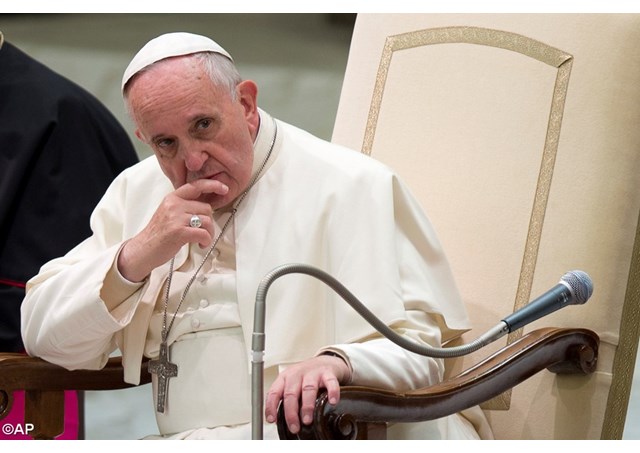 (Vatican Radio) Pope Francis met on Saturday afternoon with the participants of a three-day international conference in Rome, marking the 10th anniversary of Dignitas connubii, the instruction to be observed by diocesan and inter-diocesan tribunals in handling cases of the nullity of marriage.

In his prepared text, Pope Francis said the high participation at the three-day conference demonstrates “a generous response to the stresses that every authentic minister of the tribunals of the Church feels for the good of souls.”

It also demonstrates the “importance of Dignitas connubii, which is not directed to law specialists but to the workers in the local tribunals,” he said. "It is, in fact, a modest but useful vademecum (handbook) that really takes the ministers of the tribunals by the hand toward the implementation of a process that is both sure and expeditious.”

“A sure process because it indicates and explains with clarity the goal of the process itself, namely moral certainty: this requires that any prudent, positive doubt of error be totally excluded, even if the mere possibility of the contrary is not excluded,” he said, referring to Article 247, Section 2, of the instruction.

“An expeditious process because—as common experience teaches—those who know well the road to travel, go more quickly,” he continued. “The knowledge and, I would say, the use of this instruction can, even in the future, help ministers of the tribunals to shorten case proceedings, often perceived by spouses as long and wearisome.”

“Up until now, not all of the resources that this instruction makes available for an expeditious process, devoid of every formalism for its own sake, have been explored; nor can we exclude further legislative acts in the future aimed at the same end,” he stated.

“Among the concerns that the Instruction Dignitas connubii manifests, I have already recalled that of the proper and original contribution of the defender of the bond in the marriage process,” he said. “His presence and the faithful fulfillment of his task do not condition the judge, but allow and encourage the impartiality of his judgment, having set before him the arguments for and against the declaration of nullity of marriage."

The three-day conference on Dignitas Connubii was organized by the faculty of canon law of the Pontifical Gregorian University, with the collaboration of the Pontifical Council for Legislative Texts and the Consociatio internationalis studio iuris canonici promovendo.