Pope Francis to Rota: salvation of souls is highest law 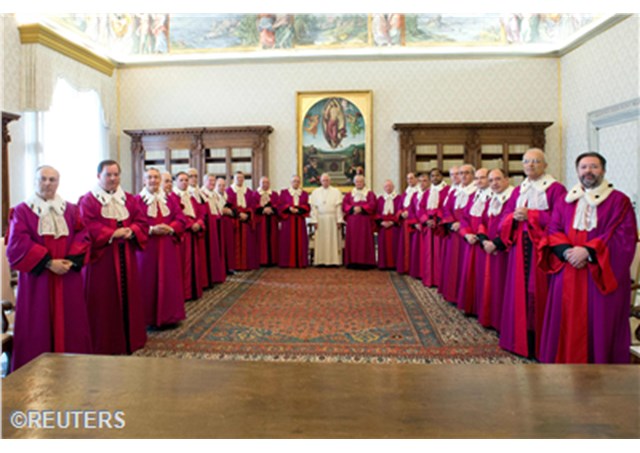 (Vatican Radio) Pope Francis received the judges and advocates of the Roman Rota on Friday, to inaugurate the tribunal’s 2015 judicial term. The Roman Rota is the highest ordinary appellate court in the Church’s judicial system. The bulk of the work of the Rota involves deciding cases of marital nullity – marriage annulments, in colloquial parlance.

In remarks to the Rota on Friday, Pope Francis reminded the judges and advocates of the tribunal that the highest law is the salus animarum – the salvation of souls – and that the necessary legal structures of the Church are in the service of the faithful and of the Church’s broader mission of helping the whole world to hear and live the universal call to holiness. “I would like, therefore,” said Pope Francis, “to exhort you to a greater and passionate diligence in your ministry, offered in the service of the protection of the unity of the jurisprudence of the Church.”

Citing the great number of faithful in irregular marriage situations, Pope Francis called on the officers of the Rota to have great care and sensitivity to the importance of a formed conscience – or lack thereof – in regard to the nature and purpose of marriage, and the ways in which conscience can affect the very validity of marital unions. “This,” he said, “is the great difficulty of your mission, along with judges in every diocese: not to keep the salvation of persons enclosed within the straits of legalism.”

The Holy Father concluded with a reminder that access to the legal structures and competent, professional legal representation are both the right of every member of the faithful, and the duty of the Church to provide without respect for any member’s ability to pay for them. Departing from his prepared text, Pope Francis said, “This is a point I would like to stress: sacraments are free-of-charge. The sacraments give us grace – and due process in marriage cases (It. un processo matrimoniale) touches the Sacrament of Holy Matrimony. How I would like all marriage processes to be free-of-charge.”