Cardinal Filoni meets with Vietnam officials during visit to Hanoi 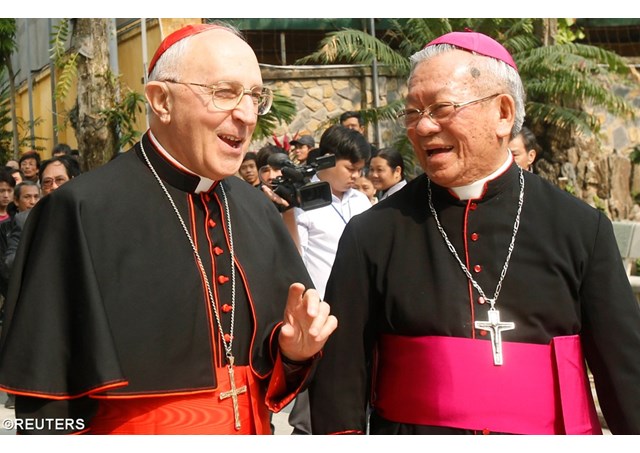 (Vatican Radio) Cardinal Fernando Filoni, the Prefect of the Congregation for the Evangelization of Peoples, is on a pastoral visit this week to Vietnam.  On Tuesday, Cardinal Filoni, who was accompanied by the Archbishop of Hanoi Cardinal Nguyen Van Nhon, met with the Secretary of the Hanoi Party Committee Pham Quang Nghi, who is also a member of the Central Committee of the Communist Party of Vietnam.

During the encounter, Nghi said the Party and State of Vietnam and municipal authorities respect freedom of religion and belief and acknowledge the tradition of solidarity of the nation and among religions.

He congratulated Archbishop Nguyen Van Nhon on his appointment as Cardinal by Pope Francis, saying it accurately reflects his contributions to the Vietnamese Catholic community, which he praised for their contributions to the development of the capital and the nation as a whole.

“I [told Mr. Nghi] that dialogue is the fundamental element for mutual understanding, but that at the basis of dialogue there has to be esteem,” Cardinal Filoni said.

Cardinal Filoni told Vatican Radio the Church in Vietnam as “very much alive,” and was carrying on the “missionary commitment of Pope Francis.”

During his trip, Cardinal Filoni has met with many of the civil authorities in the country. The day before his meeting with Nghi, he met with Prime Minister Nguyen Tan Dung.

The Cardinal told Vatican Radio he hopes these meetings will further relations between the Holy See and Vietnam.

“I found much openness, a great willingness to carry on the dialogue that has started, and that can progressively take steps forward,” he said.