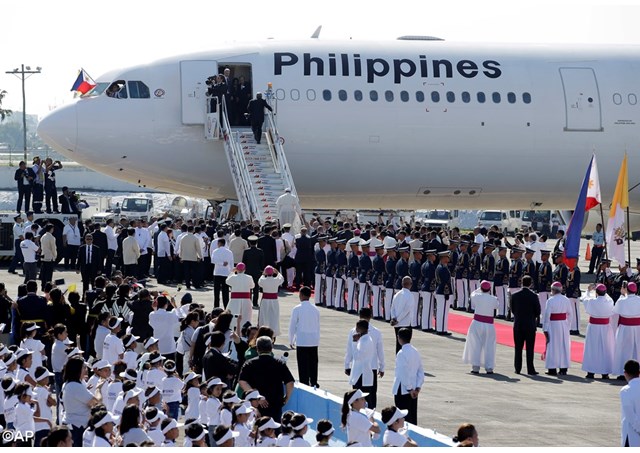 (Vatican Radio) Pope Francis left Manila on Monday morning, after a weeklong trip to Asia which took him to Sri Lanka and the Philippines. Hundreds of thousands of Filipinos lined the streets of Manila to catch a final glimpse of the Holy Father as he went to the airport.

Pope Francis drew over 6 million to his final Mass in Manila’s Luneta Park on Sunday, the largest crowd for a Papal event in history.

At a press conference after the Pope’s departure, the Archbishop of Manila, Cardinal Luis Antonio Tagle said everyone in the Philippines was “overwhelmed right now with thanksgiving and gratitude to God” for the trip, and were “challenged” by Pope Francis to face problems such as inequality in the country.

Listen to excerpts from the Press Conference in Manila after the departure of Pope Francis:

“The priest, religious, the lay, all of us got the message clearly,” said Cardinal Tagle. “We will call on everyone to put this message into action.”

He added that the papal message on bridging the gap between the rich and poor is “not just for Christians but for all.”

Cardinal Tagle also said Pope Francis is challenging the culture to not blindly accept every novelty.

“I think the Holy Father is also inviting us to be discerning and to be critical,” he said.

“Not everything new is necessarily good.  Here I think the Christian spirituality of discernment can be handy,” continued the Cardinal.  “How do we immerse ourselves in the World of God, in prayer, in the teachings of the Church, and with that deep resource How do you address the changes in the world?”

“He said it is the simple faith that makes people survive the changes in society,” said Cardinal Tagle.

Bishop Mylo Vergara, the head of the Communications Committee of the Philippines Bishops Conference, said the trip was full of surprises.

“You have witnessed how he did not read the prepared homilies,” Bishop Vergara said, calling it the “homily of the heart”.  He also mentioned the events on Saturday in Tacloban, as a Tropical Storm approached the area.

“I think it is also a first that he wore a raincoat,” he said.

It was also confirmed at the press conference that the Bishops have invited Pope Francis to return to the Philippines next year for the International Eucharistic Congress in Cebu.