Pope at Mass in Manila : We are called to be God’s children 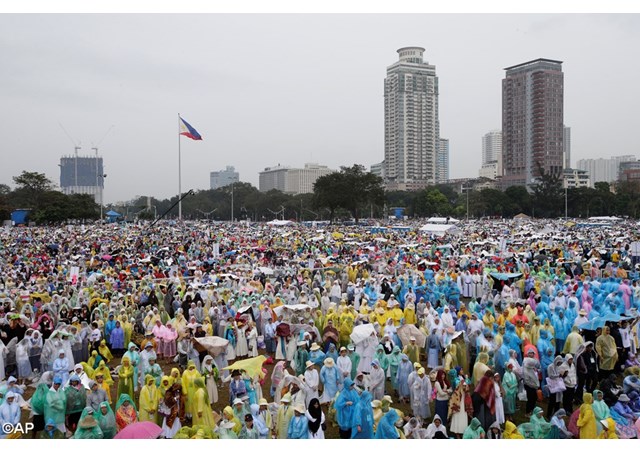 (Vatican Radio)  Pope Francis celebrated Mass Sunday in Manila’s Luneta Park for enthusiastic crowds who had braved inclement weather to turn out to see their beloved Pope.  The head of Vatican Radio’s English Service, Seàn-Patrick Lovett, is traveling with the Pope and sent this report:

Listen to the report by Seàn-Patrick Lovett:

So? How many people were there at Pope Francis’ final Mass in Manila’s Luneta Park? According to the Metro Manila Development Authority, or local traffic department, there were 2.5 million along the route from the Nunciature alone, even before you reach the park which can hold another 1.5 million, give or take a few hundred thousand. You do the math.

But, quite frankly – who cares?

It never was a question of quantity so much as quality. And quality there was, in abundance. Especially if you take into consideration the fact it rained the whole day and that many people spent 24 hours in the open air to ensure they found a place at an event that was as much historical as it was liturgical. And what to say about the piety, prayerfulness  and devotion of all those millions? When last did you see that many heads bowed in meditation, or that many hands clasped in prayer, or hear that many voices raised in song?

Pope Francis saw. And he heard. And taking his cue from the day’s local Filipino feast of the Santo Niño, the Holy Child, he focussed his reflections during the Homily on the fact that we are all Children of God, all called to be part of God’s Family. The only time he went off-script was to insist: “This is sin: to forget we are God’s children”.

The Pope went on to provide a list of what he called the distractions of the Devil who tempts us with the promise of “ephemeral pleasures and superficial pastimes”, squandering our God-given gifts by “tinkering with gadgets” or spending our money on “gambling and drink”, forgetting to focus “on the things that really matter”. He also used the occasion to call for the protection of the Family against “insidious attacks and programs contrary to all that we hold true and sacred”. Referring to the Gospel reading from Mark Chapter 10, Pope Francis spoke of the way Jesus embraces children, saying that we too need “to see each child as a gift to be welcomed, cherished and protected. We need to care for our young people, not allowing them to be robbed of hope and condemned to life on the street”.

Finally, no report on this last public event of Pope Francis’ visit to the Philippines would be complete without a reference to the music, to the massed choirs and orchestras comprising over 1,000 elements and representing the very best of the nation’s musical talent. This is one case where I sincerely invite you not to take my word for it – but to listen for yourself…