Cardinal Tagle thanks Pope for visit to Philippines 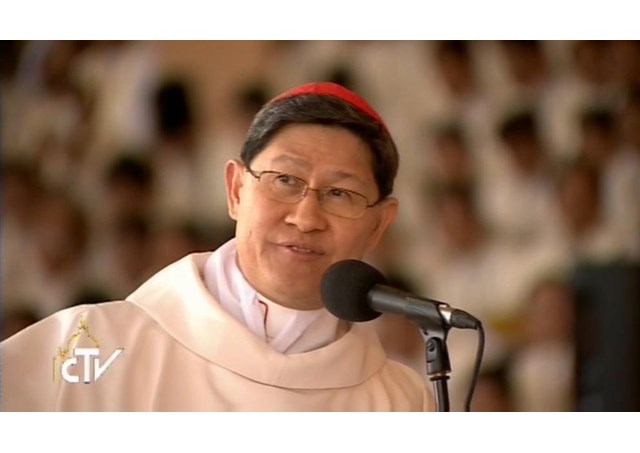 Listen to Cardinal Luis Antonio Tagle's words of thanksgiving at the conclusion of Mass at Rizal Park in Manila:

Below, please find the prepared text for Cardinal Tagle’s remarks:

In the name of the Archdiocese of Manila, the people who worked tirelessly for your pastoral visit, and the Filipinos whom you have been strengthened in faith these past days, I once again say Thank You. I say “Maraming Salamat po” (Thank you very much) on behalf of the street children, the orphans, the widows, the homeless, the informal settlers, the laborers, the farmers, the fisher folk, the sick, the abandoned elderly, the families of missing persons, the victims of discrimination, violence, abuse, exploitation, human trafficking, the Filipino migrant workers and their families, the survivors of natural calamities and armed conflicts, the non-Christian Catholics, the followers of non-Christian religions, the promoters of peace especially in Mindanao and creation that groans. We say again, “Maraming salamat po, Santo Padre.”

You often end your encounters with people by saying, “I ask you to pray for me.” We promise to pray for you. But we want to assure you that Jesus prays for you. Jesus himself declared to Peter, “I have prayed for you that you own faith may not fail.” (Luke 22:32). Your Holiness, you are blessed. Jesus prays for you. We your beloved Filipinos unite ourselves with Jesus in praying for you to God the Father.

You arrived in the Philippines three days ago. Tomorrow you will go. Every Filipino wants to go with you – not to Rome - but to the peripheries, to the shanties, to prison cells, to hospitals, to the world of politics, finance, arts, sciences, culture, education, and social communications. We will go to these worlds to bring the light of Jesus, Jesus who is the center of your pastoral visit and the cornerstone of the Church. We will go where the Light of Jesus is needed. Here in Luneta, the Qurino Grandstand, where heroes are revered, newly elected presidents take office and popes meet the Filipino faithful, here in a place of new beginnings, send us forth as missionaries of the light. Before you go, Holy Father, send us to spread the light of Jesus. Wherever the light of Jesus shines, you and the Filipino people will always be united. Mabuhay, Santo Padre! Mabuhay si Kristo! Let the light of Christ shine!