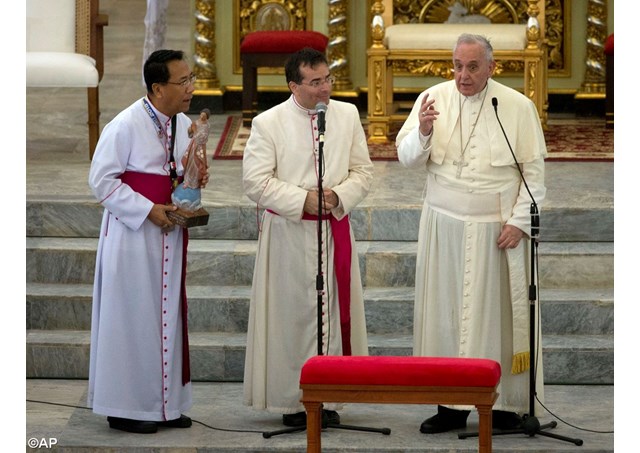 (Vatican Radio) Pope Francis made a very brief stop at Tacloban cathedral in the Philippines on Saturday, ahead of his departure from the island of Leyte. The Holy Father's departure was anticipated by four hours, due to the arrival of inclement weather. Bishops, priests, men and women religious, and families affected by Typhoon Yolanda in 2013, were scheduled to meet with the Holy Father in the cathedral. Pope Francis was visitng Tacloban, on the island of Leyte, to show solidarity with the people there, who were sorely tried by the destruction caused by the storm. Please find raw audio and a transcript of the Holy Father's remarks, below.

Click below to hear the Holy Father's words at Tacloban cathedral

Pope Francis: Thank you for your very warm welcome. The cardinal walking in now together with Cardinal Tagle is the Cardinal Secretary of State, Carinal Parolin, and it is his birthday.  Will you sing him something?

I have to tell you something that makes me unhappy: the problem is that the way things were planned was that the plane would leave at 5pm this afternoon. But there’s a second grade typhoon, or storm that’s around us and the pilot of the plane has insisted we have to leave at 1pm. We just have time to get to the plane because the weather forecast says after 1pm it will get much worse. So I apologise to all of you.

I am so sorry about this because I had something especially prepared for you. Let us leave everything in the hands of our Lady because I have to go now. Do you know what the problem is? Airplanes can’t land here, that’s the problem.

Let’s pray the “Hail Mary” together and then I will give you my blessing.