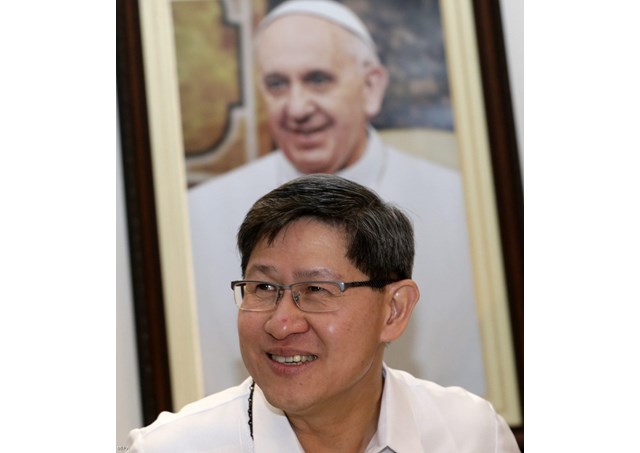 The cardinal revealed how moved Pope Francis was by the experiences of those most badly affected by the 2013 Typhoon Yolanda, the strongest storm ever recorded on land, which killed thousands and left up to a million people homeless.

Though he was forced to cut short his official programme because of another storm on Saturday, Cardinal Tagle says the Pope was determined to meet first hand with the people of Tacloban and Palo, including a group of 30 survivors who were able to share their stories of suffering with him…

Cardinal Tagle says he will never forget the face of the Pope listening to each survivor’s experience of losing parents, spouses, children or all their possessions. He says the Pope was suffering and was reduced to silence, which he described as “the communion and solidarity that happens in silence”….

The Cardinal says Pope Francis also blessed a new centre for the poor, named after him, and went onto the cathedral in Palo where he had a few minutes to apologise to the people inside and bless them before his plane had to depart for Manila….

The Filipino leaders says he took it for granted that the Pope would bring inspiration to people in his country but he was really curious to see how the Pope would be affected by his people. When he asked him on the plane if he was tired or fearful of his first typhoon experience, the Pope replied that this visit is a learning experience for him……