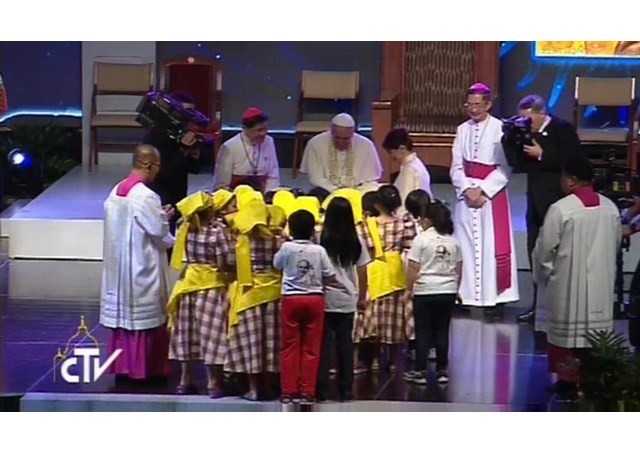 (Vatican Radio)  Pope Francis met with families in the Philippines on Friday 16th of January on the second day of his five day trip to Asia Pope at the “Mall of Asia Arena,” Manila’s principle sports arena. On this occasion the Pope said “the Philippines needs holy and loving families to protect the beauty and truth of the family in God’s plan.” The head of the English Programme at Vatican Radio, Seàn-Patrick Lovett is with the Pope in Manila and filed this report:

Three families, three stories. Stories of sacrifice and sorrow, but also strength and survival. Pope Francis listened intently to them all: to the Dizon Family with their 40 grandchildren and 10 great grandchildren; to the Pumarada Family who manage to stay united even at a distance while their father is a migrant worker in Singapore; and to the Cruz Family with their five children, and parents who are both hearing impaired. In fact, their presentation was made using sign language.

But it was Pope Francis’ own story that made the event so unique.

Repeating a technique he had experimented with last year during the trip to South Korea, the Pope frequently departed from his prepared speech in English and, with the help of his personal translator, spoke off the cuff in Spanish. The result was another unexpected and  intimate glimpse into the mind and heart of Jorge Bergoglio.

After reading just a few lines of the formal discourse dedicated, obviously, to the family and, particularly, to the figure of St Joseph, the Pope remarked how it made him remember his own family. Picking up on how St Joseph is often depicted sleeping while an Angel reveals God’s will to him in a dream, Pope Francis began reflecting on the importance of “dreaming in the family”.

“All fathers and mothers dream of their sons and daughters in the womb for nine months”, he said. “They dream of what they will be like”. “When you lose the ability to dream, you lose the ability to love”, he added. How many solutions could be found to problems in the family if only we took the time to reflect, “to dream about the good qualities” of our wives or husbands?  “And never forget about when you were still boyfriend and girlfriend. That’s very important”, he added – to the obvious delight of his audience.

Then he revealed what he called “something very personal”. He told the story of his devotion to St Joseph and how he keeps a statue of the sleeping St Joseph on his desk. But that’s not all. Whenever he has a problem, he writes it down on a piece of paper and slips it behind the statue so the Saint can sleep on it and “dream” up a solution.

The Pope also had words of great esteem and affection for Blessed Paul VI, praising what he called his “strength to defend openness to life” and his “courage to warn his sheep about the wolves that were approaching”. Those “wolves” are, of course, individuals and institutions that continue to try and destroy the family through attacks Pope Francis described as “ideological colonization”.

Finally, the Pope mentioned how moved he was earlier in the day when he visited the shelter for street kids and abandoned children near Manila Cathedral. “How many people in the Church work to make a house a home”, he remarked.

That too, means Family.