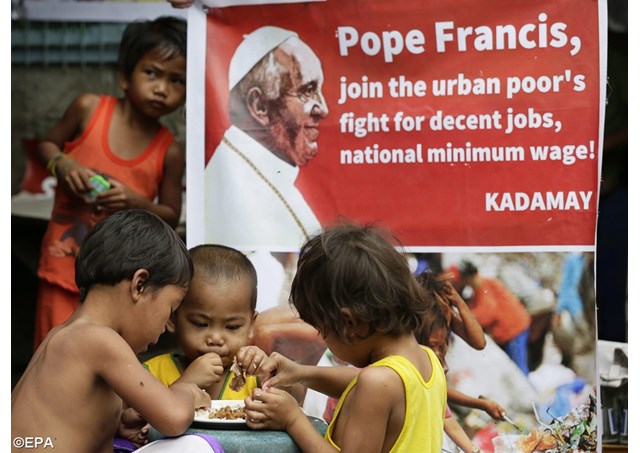 (Vatican Radio) Asked to pick out one of the events of Pope Francis’ first full day in the Filipino capital Manila, Father Federico Lombardi SJ immediately focused on the meeting between the Pope and poorest of the poor: Manila’s street-children.

Speaking to Vatican Radio’s Sean Patrick Lovett at the close of an eventful day, the Director of the Vatican Press Office had no hesitation in choosing the event that had not been scheduled according to the official programme…

Pope Francis arrived in Manila on the second leg of his Asian journey on Thursday evening, but Friday was his first full day in the Philippines and saw him engaged in a series of events including the meeting with the President, the Mass in the Cathedral and the Meeting with Families.

But Father Lombardi chooses to describe the deep emotion arising from Pope Francis’s unscheduled meeting with street children which he explains, took place in a home for street children run by the ANAK-Tnk charitable foundation.

The home, he says, normally hosts some 20 little girls but present to meet with the Pope there were
“Also many other children of different ages” looked after by the same foundation that hosts them in different homes in Manila – of which there are over 300.

Lombardi described the meeting as “very spontaneous,” a meeting in which the Pope “felt these children’s need for affection and love” but also “the hope that is in their heart if they feel that someone loves them”.

Lombardi also comments on the short speech with which a French priest addressed the Pope explaining the suffering of these children which is impossible to express but “you can see in their eyes the joy of meeting the Pope and their hope for the future”.

“I think the Pope desired very much this meeting because (these children) are the concrete sign of what he would do in his life – he would meet all the street children in Manila! This of course is not possible, but being with this representative group is, a way to manifest what is at the center of his attention, of his heart” he says.

Lombardi also points out that the Pope added a sentence in his homily during the Mass for members of the Church in which he says: “The poor are at the center of the Gospel. If you take away the poor from the Gospel you lose its entire sense and the message of Jesus Christ is void”.

In this sense – Lombardi says - the little children abandoned on the street are the poorest of all because they are so poor and weak, that if they are not taken into a home they die.

In this sense – Lombardi concludes - this meeting was “very expressive of the entire sense of the mission of the Pope here, a mission that speaks of poverty, inequality in this society but also in many other societies as well, and of our responsibility to build a different kind of society where love is the criteria for our choices”.