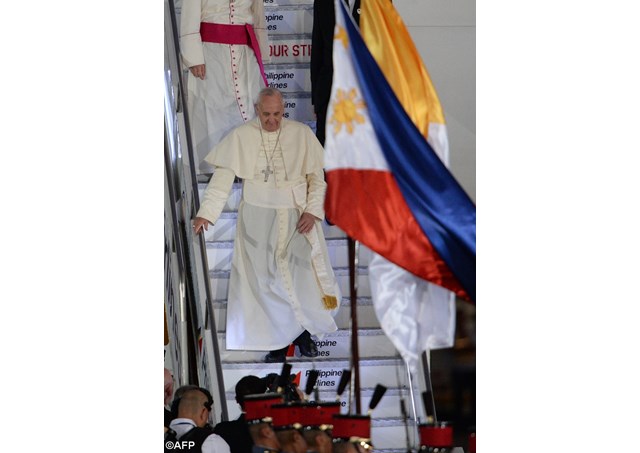 (Vatican Radio) Pope Francis has arrived in Manila, the Filipino capital, for the second leg of his pastoral visit to Asia. After a six and a half hour flight from the Sri Lankan capital of Colombo, the papal plane was greeted by cheering, singing and dancing crowds as it touched down on Thursday morning at an air base close to the international airport in Manila named after the assassinated Filipino leader 'Ninoy' Aquino. Francis is the third pontiff to visit the Philippines, known as the Catholic heartland of Asia, following two trips by Pope John Paul and one by Pope Paul VI in November 1970.

The central theme of this second leg of the visit is ‘mercy and compassion’ and among the most eagerly awaited moments will be a trip on Saturday to the central city of Tacloban, nearly 600 kilometres southeast of Manila, which was hardest hit by a typhoon in November 2013 that left over seven thousand three hundred people dead or missing. Pope Francis will celebrate an open air Mass at Tacloban airport, bless a new centre for the poor named after him and have lunch with survivors of Typhoon Haiyan, or Yolanda as it was known in the Philippines. He’ll also meet with priests, seminarians and religious men and women in the Cathedral of the Transfiguration in the nearby town of Palo which was also devastated by the violent storm.

In the sprawling capital of Manila the Pope will celebrate two Masses, one on Friday in the Basilica of the Immaculate Conception, after a meeting with President Benigno Aquino, and followed by an encounter with families from right across the country. On Sunday, the final day before his departure, he will preside with all the local bishops at a concluding Mass in the giant coastal park where Pope John Paul II addressed an estimated crowd of mainly young Filipinos exactly two decades ago.

In a pastoral letter sent out ahead of the Pope’s arrival in the Philippines, the popular Archbishop of Manila, Cardinal Luis Antonio Tagle said the Pope’s visit will offer opportunities “to experience grace, to hear callings, to disturb comfort zones, to value the poor, to renew society, to care for creation and to live honourably.”