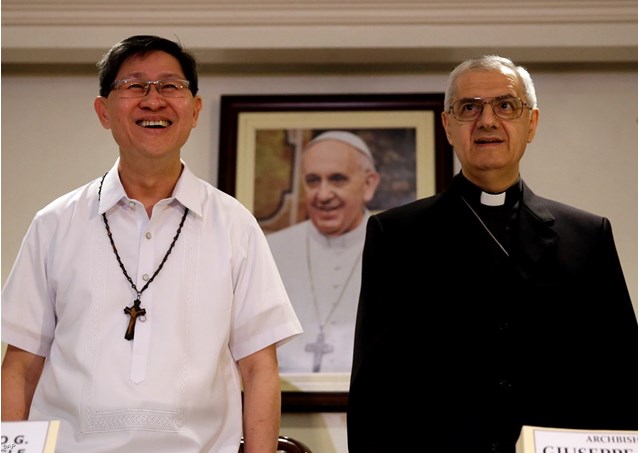 (Vatican Radio)  The Apostolic Nuncio to the Philippines, Archbishop Giuseppe Pinto, says he is looking forward to welcoming Pope Francis upon his arrival in Manila 15 January.  He says the archipelago, Asia's biggest Catholic nation, is still attempting to rebuild after the devastation caused by Typhoon Haiyan (or Yolanda) in November 2013. 7,300 people were either confirmed dead or missing and tens of thousands of homes, businesses, healthcare facilities and schools were damaged or destroyed in the wake of Haiyan.

The head of Vatican Radio’s English Service, Sean Patrick Lovett, spoke with Archbishop Pinto about his visit to one of the hardest hit areas, Tacloban, for Christmas that year - just weeks after the deadly storm.

“I saw destruction everywhere but people were ready to start again with their faith…” says the Archbishop.

The nuncio agrees that many Filipinos feel that their faith is stronger than a typhoon though it was put to the ultimate test in Tacloban,  the “ground zero” of the storm.  “Thousands of people lost everything.”

He adds that while many international aid agencies had set up operations to assist the local population and were greatly appreciated, the local community was not ready to give up, saying  ‘we do what we can.’ “Because reconstructing thousands and thousands of homes will take 9-10 years,” admits the nuncio. “It is not easy because even the place is not easy to reach. “

Archbishop Pinto describes how two statues, of St. Joseph and of the Virgin Mary, were found standing upright, and intact, amid the typhoon’s debris.  The local archbishop, he notes, went down into the destroyed chapel and risking his life, dug out the tabernacle containing the Eucharist.  He recounts how the archbishop then gave the tabernacle a new home in his own house by constructing a temporary chapel with left-over materials like stones and wood.