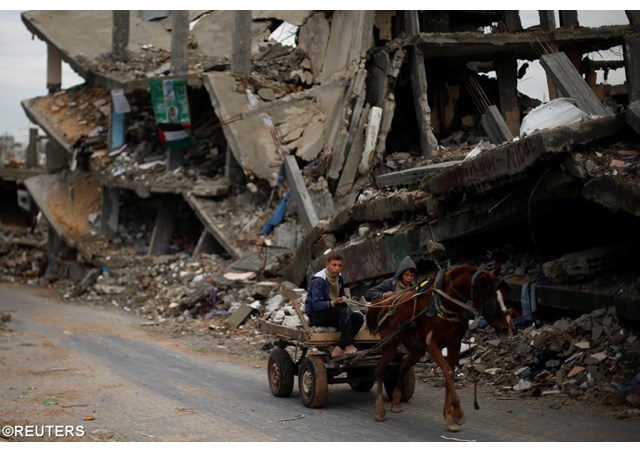 (Vatican Radio) On the first full day of their visit to the Holy Land, the Bishop's co-ordination group travelled to Gaza to witness at first hand the scale of destruction of a war last Summer which claimed the lives of over 2,100 Palestinians and over 70 Israelis.

We had been briefed by Catholic Aid Agencies that the destruction wrought in the 51 day war in Gaza between July and August 2014 was on a level that even they had not witnessed before. They weren’t exaggerating. No picture can fully describe the full extent of what parts of Gaza have been reduced to.  The Bishops for the Holy Land Co-ordination group was brought to the worst affected area of the strip called Shajaieh. We stopped at what used to be the Al Wafa rehabilitation hospital, it was reduced to rubble with a picture showing what it used to look like. Our guide warned us there was worse to come.

As we continued on we saw shelled houses, roads reduced to mud. We looked upon the belongings that people left behind. But what was also startling was that some people were living in unsafe houses, with sheets covering their entrances. The Bishops' Group have been coming on this visit for 15 years, but the looks on their faces said it all, as they walked along streets in silence. One Bishop was reduced to tears at what he saw, and I heard words like, “there’s nothing left”.

As we made our way back to the bus which would take us to evening Mass, we came across a man who pointed to a building in ruins and said “that used to be my house”.

With the Bishop’s for the Holy Land Co-ordination group in Gaza, I’m Lydia O’Kane