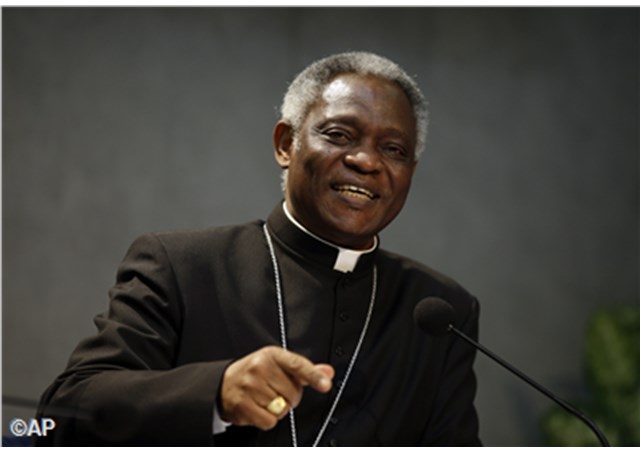 (Vatican Radio) In a document entitled, "The enhanced commitment of the Catholic Church in combating the spread of Ebola," The Holy See has expressed its appreciation to local Churches in Africa who are at the epicentre of the Ebola emergency. The Holy See is also making a financial contribution which will be accessible to communities in parishes. Below is a Communique released by the Pontifical Council for Justice and Peace:

The Holy See wishes to express its appreciation to the local Catholic Church in Guinea, Liberia and Sierra Leone for its timely response to the Ebola crisis.  In order to strengthen these efforts, and as a practical response to the emergency, the Holy See is making a financial contribution.  The funds will support Church-sponsored structures with a view to increasing the assistance they offer via healthcare institutions, community initiatives and pastoral care of patients and healthcare professionals.

The Holy See encourages other donors, whether private or public, to add to these funds as a sign of solidarity with our brothers and sisters who are suffering gravely in the areas affected by the disease.

The monies contributed by the Holy See will be used to purchase much-needed protective supplies, to assist with the transport of patients, and to pay for the renovation of buildings, among other things.  A portion of the Holy See’s contribution will be directed towards residents in targeted communities so as to develop and enhance strategies needed to stop the spread of Ebola.  Funds are also earmarked for the support of afflicted families and orphaned children.  As part of a pastoral response, the Holy See will contribute to the care of people in affected areas by training and supporting clergy, men and women religious as well as lay pastoral workers, ensuring that they are better equipped to attend to the physical, emotional and spiritual needs of the sick and the suffering.  The Holy See will focus on parishes, because so much of the Church’s work takes place at the level of the parish, and it is an important grassroots institution in fighting the Ebola-related stigma now emerging as a serious problem, particularly for survivors.

The enhanced commitment of the Catholic Church in combating the spread of Ebola is expressed in a document entitled, “Expanding the Catholic Church’s Commitment to the Ebola Emergency Response”.  This document outlines, for the first time, a pastoral response to a relatively new disease that has devastated individuals, entire families and even communities, particularly in the West African countries of Guinea, Sierra Leone and Liberia.

The Catholic Church has for many decades been involved in providing humanitarian and development assistance in West Africa.  The Church knows well, then, how healthcare institutions of all types – already facing grave challenges due to poverty and longstanding social and political unrest – are severely challenged by the current crisis.

In addition to the work of the Church in the region, this document details the efforts being made by several departments of the Roman Curia, including the Pontifical Council Cor Unum, the Pontifical Council for Health Care Workers (for Health Pastoral Care), Propaganda Fide, the Pontifical Council for Justice and Peace, as well as the work of Caritas Internationalis and its member organizations.  This is in addition to the efforts of Catholic agencies in various other countries, such as Catholic Relief Services (U.S.A.), Missio Austria, and Misereor and the Medical Mission Institute (Germany).  The Church’s intensified efforts will thus enable a greater response at the parish level and thus strengthen measures to contain the disease.

“Expanding the Catholic Church’s Commitment to the Ebola Emergency Response” focuses on local communities.  The Church “does not come and go; people turn to the Lord in time of fear and need.  This Church is a visible witness to the presence of Jesus Christ at all times but particularly at times of adversity.”