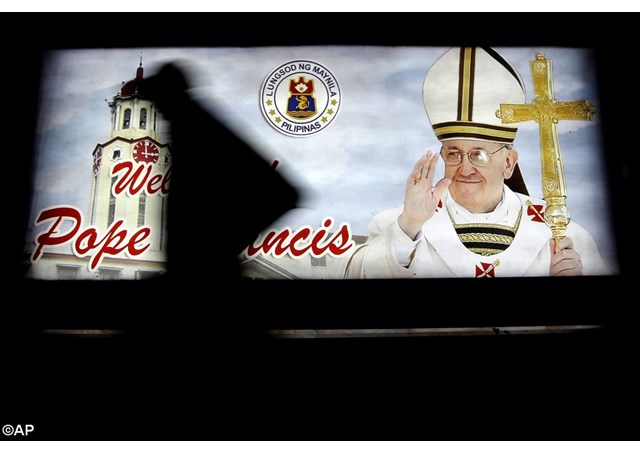 (Vatican Radio) At a press conference in the Vatican on Wednesday, Father Federico Lombardi, SJ, the head of the Holy See Press Office, spoke about the significance of Pope Francis’ upcoming Apostolic Voyage to Sri Lanka and the Philippines, and gave details of the trip.

Father Lombardi pointed out that this will be Pope Francis’ second trip to Asia, following his journey last summer to Korea. The decision to return again to the continent, Lombardi said, highlights the Holy Father’s attention to this “great continent.” He also noted that, as Benedict XVI was not able to make a trip to Asia, it was important to “recover a sense of the papal presence” in the continent that numbers a great part of the human population.

Pope Francis’ seventh Apostolic journey has a fairly precise schedule, with two full days in Sri Lanka, and three full days in the Philippines, with a travel day in between.

Father Lombardi also spoke about previous visits of Popes to the two countries. Blessed Pope Paul VI during a long trip to the region, visited both the Philippines and Sri Lanka in 1970. In a similarly extensive trip in 1995, Pope Saint John Paul II visited both countries; he had previously visited the Philippines in a trip to southeast Asia in 1981. These trips, Lombardi said, have been of “great importance” for relations between the Popes and the continent of Asia.

In preparation for the Pope’s upcoming voyage, Fr Lombardi said it is helpful to look at the logos for the visits to each country. The logo for the trip to Sri Lanka includes a characteristically “oriental” cross, with the figure of Blessed Joseph Vas, who will be canonized by Pope Francis in Colombo. The design is completed with the miter of Pope Francis in the background.

For the trip to the Philippines, the logo is a little more simple, featuring a white cross in a yellow circle at its centre, surrounded by red and blue arms representing mercy and compassion. The colours used in the image are the colours of the Philippine flag. Father Lombardi noted that one of the purposes of the Pope’s journey to the Philippines is to offer comfort to the many victims of natural disasters, especially the victims of last years’ devastating typhoon.