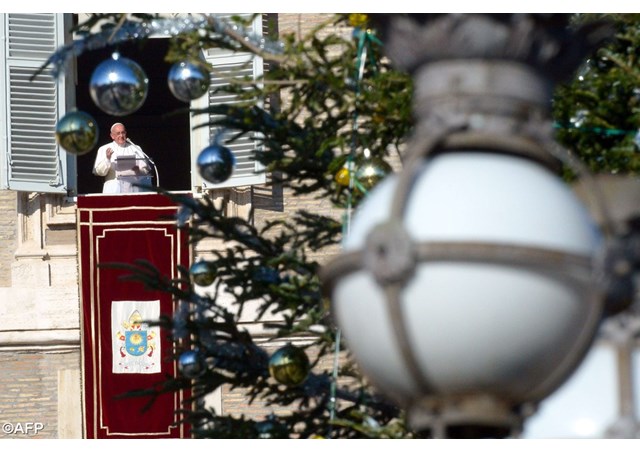 (Vatican Radio) At his Angelus address on Sunday, Pope Francis again returned to the theme of peace building. “My hope,” he said, “is that the exploitation of man by man would be overcome.”

He said, “Each person, and every people hungers and thirsts for peace; therefore, it is necessary and urgent to build peace!”

Pope Francis re-iterated that peace is always possible, and said that we are all called “called to rekindle in our hearts an impulse of hope, that should result in concrete works of peace, reconciliation, and fraternity.” Each one of us, the Holy Father said, “can accomplish gestures of fraternity in dealing with one’s neighbour, especially with those who are tried by family tensions or by disagreements of different kinds.” He continued, “These small gestures have great value: they can be the seeds that give hope, they can open paths and prospects of peace.”

Below, please find the complete text of the Pope’s Angelus address on Sunday:

A beautiful Sunday that gives us the gift of a new year! A beautiful day!

In the Gospel that we read today, Saint John says, "In Him was life, and this life was the light of the human race; the light shines in the darkness, and the darkness has not overcome it… The true light, which enlightens everyone, was coming into the world” (Jn 1:4-5, 9). People speak a great deal about the light, but they often prefer the deceptive tranquility of the dark. We speak so much about peace, but we often resort to war, or choose complicit silence, or we do nothing concrete to build peace. In fact, St John says that "He came to what was His own, but His own people did not accept Him" (Jn 1:11); because "“this is the verdict, that the light -- Jesus – came into the world, but people preferred darkness to light, because their works were evil. For everyone who does wicked things hates the light and does not come toward the light, so that his works might not be exposed” (Jn 3:19-20). So says the Gospel of St John. A person's heart can reject the light and prefer the darkness, because the light lays bare their evil works. The one who does evil hates the light; the one who does evil hates peace.

A few days ago we began the new year in the name of the Mother of God, celebrating World Peace Day on the theme: “No longer slaves, but brothers”. My hope is that the exploitation of man by man would be overcome. This exploitation is a social plague that mortifies interpersonal relations and impedes a life of communion imprinted with respect, justice and charity. Each person, and every people hungers and thirsts for peace; therefore, it is necessary and urgent to build peace!

Peace is not only the absence of war, but a general condition in which the human person is in harmony with himself, in harmony with nature, and in harmony with others. This is peace. First of all, to silence arms and to extinguish the outbreaks of war remain the unavoidable conditions to begin a journey that leads to the achievement of peace in its different aspects. I think of conflicts are still shedding blood in too many regions of the planet, of tensions in families and in communities -- but in how many families, in how many communities, in how many parishes is there war! as well as the sharp conflicts in our cities and towns between groups of different culture, ethnic and religious backgrounds. We must convince ourselves, despite any appearances to the contrary, that concord is always possible, at every level and in every situation. There is no future without proposals and projects for peace! There is no future without peace!

God, in the Old Testament, has made a promise. The Prophet Isaiah said: “They shall beat their swords into ploughshares and their spears into pruning hooks; One nation shall not raise the sword against another, nor shall they train for war again” (Is 2:4). It's beautiful! Peace is proclaimed, as a special gift of God, in the birth of the Redeemer: “Peace on earth to those on whom His favour rests (Lk 2:14).” Such a gift requires that we seek it incessantly in prayer. Let us recall, here in the Piazza, that sign: "At the root of peace is prayer." This gift should be sought and should be welcomed every day with commitment, in the situations in which we find ourselves. At the dawn of this new year, we are all called to rekindle in our hearts an impulse of hope, that should result in concrete works of peace. You don't get on with this person? Make peace! At home? Make peace! In your community? Make peace! in your work? Make peace! Works of peace, reconciliation, and fraternity. Each one of us should accomplish gestures of fraternity in dealing with one’s neighbour, especially with those who are tried by family tensions or by disagreements of different kinds. These small gestures have great value: they can be the seeds that give hope, they can open paths and prospects of peace.

Let us invoke Mary, the Queen of Peace. She, during her earthly life, knew no small difficulties, joined to the daily fatigue of existence. But she never lost peace of heart, the fruit of trustful abandonment to the mercy of God. Let us ask Mary, our tender Mother, to show to the whole world the sure path of love and of peace.

I offer a cordial greeting to all of you, dear pilgrims from Italy and from various countries to take part in this encounter of prayer.

A good Sunday to all! It's a beautiful day for visits to the museums. Please don’t forget to pray for me. Have a good lunch, and arrivederci!