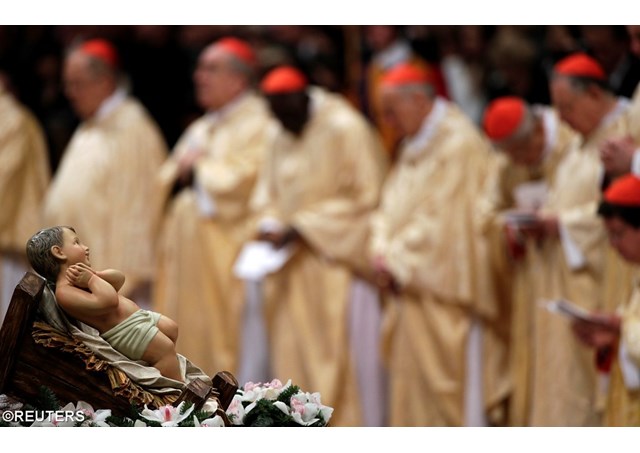 (Vatican Radio) At the Angelus on Sunday, Pope Francis announced the names of fifteen Archbishops and Bishops whom he will raise to the dignity of the Cardinalate on February 14, 2015. In addition, the Holy Father announced that five retired Archbishops and Bishops “distinguished for their pastoral charity in the service of the Holy See and of the Church” would also be made Cardinals.

Below, please find the complete text of the Pope’s announcement, with the names of all those set to be elevated to the Cardinalate:

“As was already announced, on February 14 next I will have the joy of holding a Concistory, during which I will name 15 new Cardinals who, coming from 14 countries from every continent, manifest the indissoluble links between the Church of Rome and the particular Churches present in the world.

“On Sunday February 15 I will preside at a solemn concelebration with the new Cardinals, while on February 12 and 13 I will hold a Consistory with all the Cardinals to reflect on the orientations and proposals for the reform of the Roman Curia.

“The new Cardinals are:

Archbishop Dominique Mamberti, Prefect of the Supreme Tribunal of the Apostolic Signatura

“Additionally, I will join to the Members of the College of Cardinals five Archbishops and Bishops Emeriti who are distinguished for their pastoral charity in the service of the Holy See and of the Church. They represent so many Bishops who, with the same pastoral solicitude, have given witness of love for Christ and for the people of God in particular Churches, in the Rome Curia, and in the Diplomatic Service of the Holy See.

“Let us pray for the new Cardinals, that, renewed in their love for Christ, they might be witnesses of His Gospel in the City of Rome and in the world, and with their pastoral experience they might support me more intensely in my apostolic service.”