What Pope Francis' message on human trafficking means to Africa 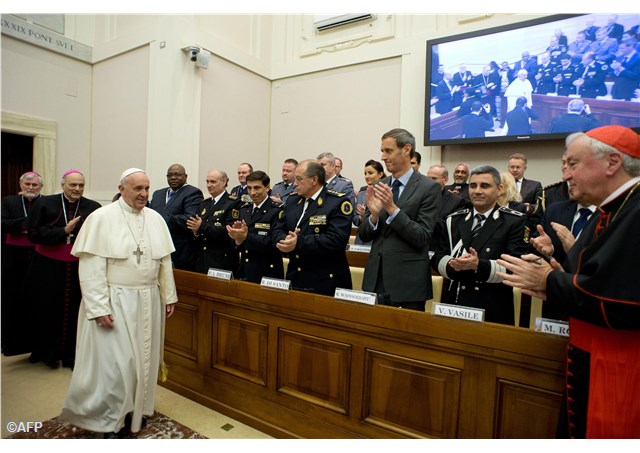 Today, 1 January 2015, people all over the world are celebrating the New Year. However, 1st January is also designated as, ‘World Day of Peace.’ This year, Pope Francis has a special message which resonates with Africa: “No Longer Slaves But Brothers and Sisters.”

Pope Francis uses the letter of St. Paul to Philemon to launch his message on the meaning of true brotherhood and sisterhood. Modern day slavery goes against the notion of fraternity. In his homily this morning, the Pope prayed and re-echoed his message when he said, “All of us are called to be free, all are called to be sons and daughters and each, according to his or her own responsibilities, is called to combat modern forms of enslavement.  From every people, culture and religion, let us join our forces,” Said Pope Francis.

Human trafficking is referred to as modern day slavery. It may be in the shadows but its presence cannot be ignored.

It is clear Pope Francis has in mind the many migrants who are lured from developing countries to Europe or to the Middle East with promises of fake jobs. Many of Africa’s young women and men have been lied to and have found themselves trafficked, trapped and enslaved. The women and girls are ensnared and are forced into prostitution or traded as sex slaves.  In many cases, the traffickers are known and trusted persons or even relatives.

No doubt the Holy Father is also thinking of those who are held in what has come to be known as debt bondage. A person becomes a bonded labourer when they are forced to work as a means of repayment for a loan.

Experts say that traffickers always find a way of making those trafficked perpetually indebted to them. First, one is offered a job somewhere abroad as a model or in construction work. The person offered the so-called job usually has no money to cover travel; pay the fee to the one who has found the ‘job;’ subsistence money and several other payments. It usually then falls upon the family to borrow the money from the same traffickers. When the victims reach their destination they often discover, to their dismay, that there is no job as a model or college for further education. They are then forced to work on agricultural plantations or in factories for many hours in horrible conditions. This is always disguised as paying-off the “debts owed.” Unfortunately the value of the work becomes greater than the original amount borrowed. In these cases, the debt is never fully paid. The debt is even passed on to the next generation. Various forms of force are used to make the victims stay and continue to work. In most cases the victims are under armed guard or are locked-up in a place of work. Sometimes, they live with the threat of violence to their families back home should they not comply.

Pope Francis puts it succinctly when he says, “I think also of the living conditions of many migrants who, in their dramatic odyssey, experience hunger, are deprived of freedom, robbed of their possessions, or undergo physical and sexual abuse. In a particular way, I think of those among them who, upon arriving at their destination after a gruelling journey marked by fear and insecurity, are detained in at times inhumane conditions. I think of those among them, who for different social, political and economic reasons, are forced to live clandestinely. My thoughts also turn to those who, in order to remain within the law, agree to disgraceful living and working conditions, especially in those cases where the laws of a nation create or permit a structural dependency of migrant workers on their employers, as, for example, when the legality of their residency is made dependent on their labour contract. Yes, I am thinking of ‘slave labour.’”

Slave labour arises from circumstances of abduction, kidnapping, child-marriage, domestic work and so on. Increasingly more and more people are being trafficked from developing countries for body parts where vital organs (heart, liver, kidneys etc.) are “harvested” from them against their consent.

There have been recent calls on the Church in Africa to work closely with governments to ensure that programmes of service delivery are responding to the needs and aspirations of the people. This is because poverty is the major cause of human trafficking. Greed and patriarchal attitudes also play a big role.

For a start, in Africa, there is need to create greater awareness for the problem. What Africa also needs most is a network of information through research and data collection that will clearly show the magnitude of the problem of human trafficking on the continent.

Fortunately Dioceses in Africa and religious congregations are starting to embrace human trafficking as an important apostolate.  Many Church justice and peace projects, in Africa, are now being directed towards this noble cause. The International Organisation for Migration (IOM) is one such organisation pioneering work in this area and a potential partner for the Church.

Nevertheless much more can and needs to be done. In the words of Pope Francis, individuals and nations should end indifference and tolerance of human trafficking.