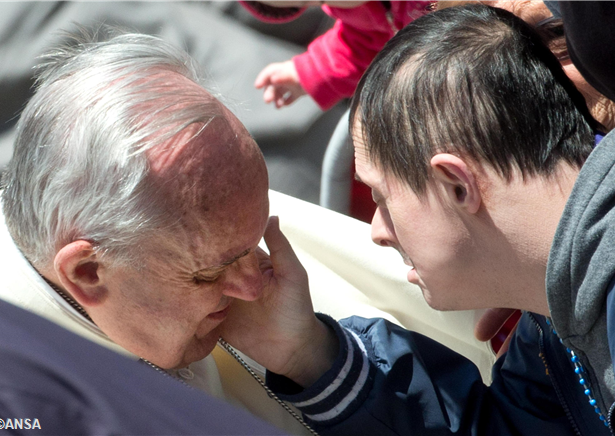 (Vatican Radio) Father Federico Lombardi SJ highlights some of the events that have made 2014 an extremely busy and significant year for Pope Francis.

In a long interview with Vatican Radio, the Director of the Vatican Press Office lists an impressive number of events, speeches, journeys and appeals pronounced by Pope Francis in the year gone by, and says that perhaps the most powerful images to linger in our minds are those of the Pope amongst the people: his reaching out to the faithful in every circumstance, the warmth of his embrace in particular towards children,  people with disabilities or ill health.

Listing the five international apostolic journeys undertaken by Pope Francis this year, Lombardi says that each of them carried within a particular message that places the Church at the center of all the current issues of our times. During 2014 the Pope travelled to the Holy Land, to Korea, to Albania, to Strasbourg and to Turkey, and Lombardi has words for each of these visits.

He is happy, he says, that the Pope travelled to the Holy Land because it is like a journey to the roots of our faith, to the roots of Christianity, to the very places of the history of Salvation, and this he says “has a strong symbolic and spiritual power”. And pointing out the ecumenical aspect of his Holy Land visit, Lombardi speaks in particular of the strong personal relationship Pope Francis has interwoven with the Ecumenical Patriarch of Constantinople and of  how this is so important for the achievement of full Christian Unity.

And speaking of the Pope’s journey to Korea, Lombardi points out that in a couple of weeks Pope Francis will again return to the Asian continent when he journeys to Sri Lanka and to the Philippines. These visits – Lombardi points out – signal a renewed attention of the Church towards a “predominant portion of today’s and tomorrow’s humanity, both from a demographic point of view” and because of its incredible diversity: “a borderless land for evangelization in social, cultural and political situations of all kinds”.

Regarding Europe, Lombardi says that the Pope’s short journey to Albania was meaningful also for his desire to start from the periphery before going to the heart of the Continent – represented by his trip to Strasbourg when he addressed the  European Parliament and the Council of Europe; a particularly powerful and wide-ranging speech with the added weight of his own non-European  provenance and  viewpoint.

And finally Turkey, where the significance of ecumenism was again highlighted together with interfaith dialogue and his forceful “reaching out” to the Christians (and other minorities) in the Middle East who are pouring across borders to flee persecution and death.

Another important feature of 2014 mentioned by Father Lombardi pertained to the canonizations of Saint John XXIII, Saint John Paul II and the beatification of the Blessed Paul VI. He points out that the common denominator of these great events is the message of the Second Vatican Council which was at the heart of the ministry of these three Popes, a message of an “open Church” that deeply marks the ministry of Francis himself.

The Synod for the Family, Lombardi says,  provides another important theme for the year as does the Pope’s unwavering attention for justice and peace, for the poor, for those who are exploited, for human trafficking, for those persecuted for their faith.

Father Lombardi recalls the innumerable appeals Pope Francis made this year to not turn away from the dramatic situation in Syria and in Iraq, for the need to protect and support migrants and refugees, for attention towards the terrible reality of new forms of slavery including human trafficking. The Pope – Lombardi says – has mobilized the Church and all men and women of goodwill on each of these pressing issues.

Not to be forgotten is Pope Francis’s clear wish to bring reform to the Church itself and to the Curia, which Lombardi says, is part of a wide ranging project that he formulated in his Apostolic Exhortation “Evangelii Gaudium”.

Concluding, Father Lombardi says there is a concept we could use to sum up and characterize Pope Francis’ 2014 and that is: his “culture of encounter”. The Pope’s attitude, the way he relates to people, the way he always offers his personality, his personal experience, his friendship as well as this thoughts and ideas really does bring about “the encounter between people,” just as both the American and Cuban Presidents pointed out when they thanked him for providing them with a new dimension in which to start building a bridge between their peoples.