Pope: at Christmas Jesus knocks at the doors of your heart 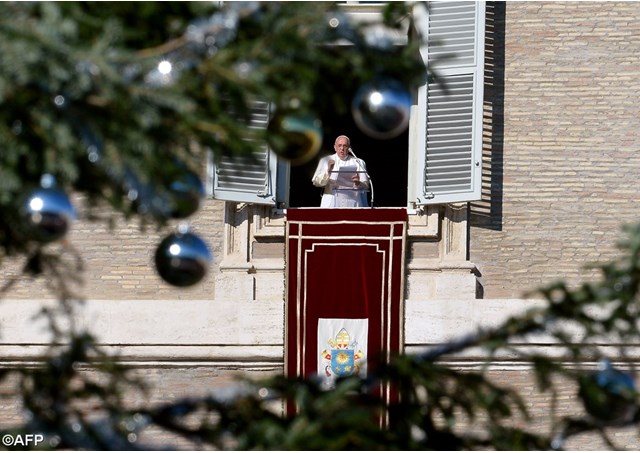 (Vatican Radio) Pope Francis on Sunday invited the faithful to listen carefully when God knocks at their door. “Too often – he said – Jesus passes by in our lives, he sends an angel and we are so caught up in our thoughts and concerns we do not even notice”.

Speaking to the pilgrims gathered in St. Peter’s Square for the Angelus Prayer, the Pope reflected on the liturgy of the last Sunday of Advent that tells of the  Annunciation of the Archangel Gabriel to Mary and on how she simply, and humbly – with an attitude of total faith in the Lord – said “yes”. She said “I am the handmaid of the Lord. May it be done to me according to your word” (Luke 1, 38).

Mary – Pope Francis said - did not know what had been laid out for her in the future, she did not know what pains and what risks she would be called to face. But she was aware that the Lord had asked something of her and she trusted in him completely. This – he said – is the faith of Mary!

Another aspect to take note of – Francis continued – is this capacity of Mary to “recognize the time of God”. Thanks to her the Incarnation of the Son of God was possible.

Mary teaches us – the Pope said – to be aware of the favorable moment in which Jesus passes in our lives asking for a ready and generous answer.

And Jesus – he said – does pass in our lives. At Christmas he knocks at the heart of every Christian and each of us is called to respond, like Mary, with a sincere and personal “yes”, putting ourselves at the disposal of God and of his mercy.

How often – the Pope pointed out – we so caught up in our own thoughts and concerns, perhaps in these very days in our preparations for Christmas, that we do not even notice that he is knocking at the doors of our hearts, asking for a welcome, asking for a “yes”.

And recalling the words of a Saint who used to say “I am afraid that the Lord will pass me by” the Pope explained that he was really afraid that he would not notice the Lord’s presence and would not be ready to respond. This attitude – Francis said – and this fear that we feel in our hearts “is really the Lord knocking” and it makes us want to be better, to be close to others and to God.

“If this is what you feel, stop” - the Pope said – “the Lord is there! Pray, go to confession, do some cleaning up… this is good. But remember: if you feel this wish to be better, it is He who is knocking. Don’t let him pass you by!”

And Pope Francis concluded his reflection recalling the silent, prayerful figure of Joseph, as he is portrayed in every nativity scene.

The example of Mary and Joseph – he said – is an invitation to all of us to welcome Jesus openly; he comes to bring the gift of peace: “peace on earth to those on whom his favor rests” ((Luke 2, 14).

Just as the angels said to the shepherds – Pope Francis said – the precious gift of Christmas is peace, and Christ is our true peace: “Christ is knocking at the doors of our hearts go give us His peace. Let us open those doors to Christ!”